ABOUT THE BOOK & WHAT TO GAIN
1- It will minimize, reduce, and possibly stop the increasing rate of heartbreaks, divorce and separations among the singles and married.

2- Extensively reveals the hidden secrets involved in having a successful relationship, dating and marriage, and addressed its attendant issues that may pose a threat.

3- The Book gave a concise and practical explanations with life experiences on what is required of anyone going into relationship, Dating and marriage.

4- It gives a clearer view of circumstances and situations that would make you to evaluate, review and address whatever challenges your current relationship, dating and marriage is facing and how to handle it.

5- In a clearer context, the singles were addressed on the importance of living right, being prayerful and shun engaging in abusive, dysfunctional and deceitful relationship and dating, and how to spot the best man or woman to be engaged with.

6- Married couples were also giving a step by step analysis on love –making, its approach and how not to selfish with emotional affairs.

7- Singles and married were also taught on how to be romantically linked with their partner and also not to allow a communication breakdown while dating and in courtship and by extension marriage.

8- Professional explanations was given on the dangers of coming into relationship, dating and marriage with certain obnoxious characters.

9- Clearer and step by step teachings were giving to the singles on when to take their relationship and dating to another level and when to be committed to each other.

10- The Book also make it clearer that your relationship, dating and marriage is a part of your future, and it can either be an exciting adventure or a nightmare.

Both Singles and Married enter into relationship, dating and marriage with great expectations, but most times, they end up disappointed and encounter unpleasant experiences due to what they are coming into the relationship with.

This Book unveils great secrets to making your relationship, dating and Marriage a success.
RELATIONSHIP BAGGAGIES YOU NEED TO DROP

RELATIONSHIP BAGGAGIES YOU NEED TO DROP 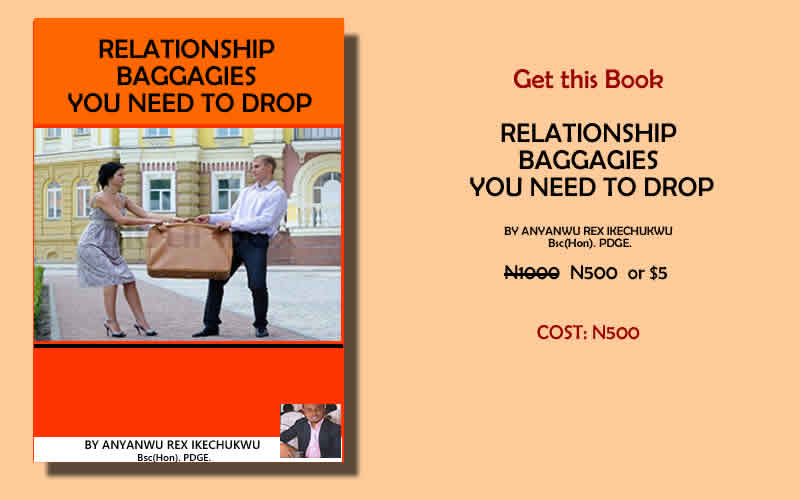 Merry Christmas Kiss from all of us ...