Operatives of the Rapid Response Squad of the Lagos State Police Command have arrested one Olaitan Shofolahan, 37, for impersonating Lagos State Land Use officials.

Shofolahan, an Accounting graduate of Moshood Abiola Polytechnic, Abeokuta, Ogun State, was arrested on Thursday in Lekki Phase 1, Eti-Osa Local Government Area of Lagos. He was arrested while attempting to defraud a resident of the posh estate of several millions Land Use Charge dues.

Shofolahan blamed unemployment as the cause of his action.

“I was working with my brother in his audit firm in Sabo, Yaba, earning N45,000 monthly salary before I left the firm in search of employment…. I was at Lagos State Civil Service Commission several times to seek employment. It was during one of my visits that I learnt that payment for Land Use Charge in the state is through a code. The code is engraved on every metal sticker issued to every house.

It is with this code that you get an annual bill of the house and that you can get your charges printed out for you free with the bills. That was how I started moving round choice location to get their code and print their bills. Any house that does not owe, I discard but those with huge bills, I work on them. But I noticed that some of them requested for my ID card. I forged a Lagos State Government identity card using a sample that I saw somewhere in Alausa Secretariat, Ikeja.

I have been in the business since February, 2015. I have observed that owners of buildings in Lekki have capacity to settle their bills quickly, that was why I have focused there. Unfortunately for me, it was this location that I was caught. I entered the building in Lekki Phase 1, unknown to me that the officials of the Lagos State Land Use Charge were there with the house owner. I saw the owner discussing with them but I didn’t know their identity. The owner of the building after sitting me down, invited RRS officials to arrest me.

Since I have been impersonating, I have only realised N30,000 which I collected from an home owner in Alausa while pretending to be an official of the State. I have not collected any other money apart from that. Each and every time I visited these buildings, they ask me to come back later,” Shofolahan said.

Five Land Use bills with varied charges above N1 million and a forged identity card of The Lagos State Government were found with the suspect. 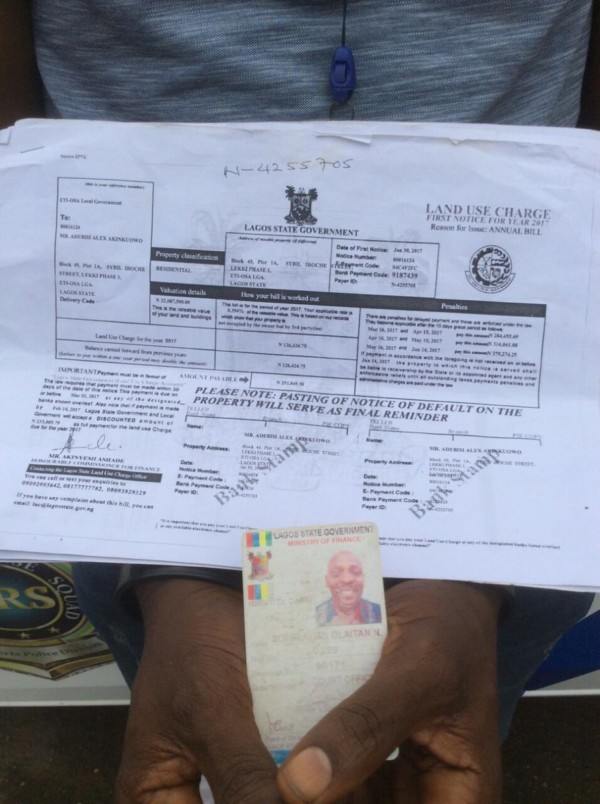 Confirming the incident, the Police PPRO, ASP Olarinde Famous-Cole, said that there will be no hiding place for criminals in Lagos State adding that officers of the command are at alert to nip crime in the bud.

The suspect has been transferred to the State Criminal Investigation Department, Panti, Yaba, for further investigation.