MUST READ: JIHAD AL-MUNAAFIQEEN (AGAINST BLASPHEMY) : BETWEEN COMPLETE AND INCOMPLETE MUSLIM 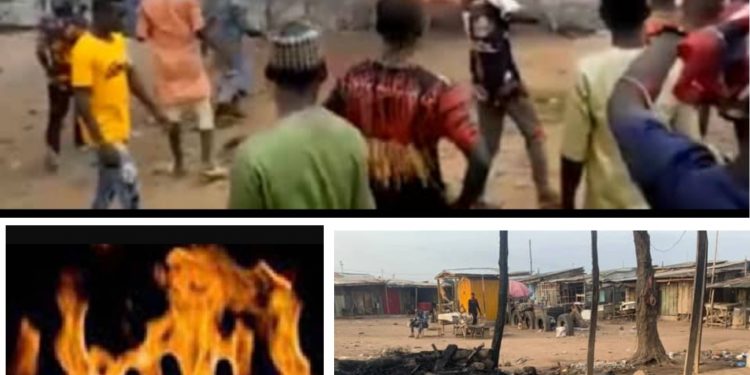 It is a matter of moral prudence for me, to express some concerns over the killing of a Muslim (Ahmad Usman; on 4th June, 2022 at Lugbe Abuja), for allegedly committing Blasphemy, just like I expressed similar concerns in the case of a Christian (Deborah Samuel Yakubu killed in Sokoto) earlier, over the same allegation (Blasphemy).

Again, I stand to be corrected over any issue expressed in this article.

One of the several definitions of Blasphemy says, “Blasphemy in Islam is impious utterance or action concerning God, but is broader than in normal English usage, including not only the mocking or vilifying the attributes of Islam, but denying any of the foundamental beliefs of the Religion.”

Blasphemy is also a HARAM (Forbidden) for Muslims to use against people of other Religions; according to Qur’an 6:108 which says, “And don’t insult those who (Disbelievers) invoke other than Allah, lest they insult Allah, wrongfully without knowledge… “

On the other hand, the Bible says of Blasphemy in Leviticus 24:16 that, “And he that Blasphemeth the name of the Lord, he shall surely be put to death… “

However, sometimes in November 2020: an Imam/Preacher in a Mosque at Gado Nasko Road/Market Road Kubwa, Abuja; delivered a sermon bordering on Blasphemy.

Part of the sermon says, “If your parents were insulted, you get angry and react, because you came to this world through them. How much more would you react, if the Creator of your very parents is the one insulted? The sermon was not backed up by any quote from the Qur’an or Sahih Hadith (as far as I listened), but it was enough to prime up his Listeners for a predetermined ‘action’.

Similarly, in a viral video making the rounds, Shieck Bello Yabo of Sokoto is seen and heard, ordering his Listeners to, kill a certain Blasphemy suspect, whenever he is released from custody of the authorities.

Going further, it is common knowledge that :-

1. Muslims have obligation to live by Shariah and Jihad (Al-Nafs, Al-Shaytaan, Al-Kuffaar and Al-Munaafiqeen)as a complete code of life and obligation respectively. Brief concepts of these four different aspects of jihad were given in my article preceding this one.

2. Compele Muslims have obligation under the Shariah to fulfill these four aspects of the Jihad.

3. Incomplete Muslims are those amongst other things who failed to fulfill one or more of the said aspects of Jihad.

4. In Islam, there is no room for incomplete Muslim; hence the concept and applicability of Jihad Al-Munaafiqen amongst the other aspects of Jihad.

5. A Munaafiqeen is said to be a Hypocrite of Islam: Muslim whose belief, commitment, practices and personal conduct in the faith, run contrary to any of the aspects of Islam (Shariah /Jihad).

Further more, a well known Hadith says, Among the signs of a Hypocrite(Munaafiqeen) are three, even if he fasts and prays and claims to be a Muslim: when he speaks, he lies; when he gives a promise, he breaks it, and when he is trusted with an ‘amana’ (Trust), he betrays it.” (Sahih: Bukhari 33, Muslim 59).

It can therefore be said that, Blasphemy by a Disbeliever (non Muslim) falls within Jihad Al-Kuffaar, while Blasphemy by a Muslim falls fairly within Jihad Al-Munaafiqen (against Hypocrite). But, unlike the case of Deborah that was clearly a ‘Disbeliever’ and Jihad Al-Kuffaar , the case of Ahmad don’t exactly fits into Jihad Al-Munaafiqen; the three other aspects of the Jihad notwithstanding. His matter is therefore subject to a rigorous Islamic Jurisprudence. This is why Teachers and Preachers of the Religion should discourage mob-action. Otherwise, Blasphemy allegation can be prearranged to blackmail and eliminate anybody. Even a whole community of people can be so blackmailed and eliminated. It can be used to initiate violence that can lead to war.

Conclusively therefore, the Jihad Al-Munaafiqen is not necessarily applicable to a Muslim Blasphemer; as it is all about a Muslim Hypocrite: who Lies, Breaks Promise, and Betrays ‘Amana’ (Trust), like we know most Nigerians do generally, particularly those Politicians and Leaders in high and low places, of the 12-Shariah States of the North. This accounts for why despite huge federal revenue allocations and international grants on education, and other sources of revenue (like Zakkat: an obligatory offerings to help the poor and needy; Quran 2:110) accruing to the Shariah States; the people remained the world records capital of; illiteracy, out of school children, poverty, Hunger, insecurities and human capital under-developement, unlike the other parts of Nigeria ; as the year 2017 National Burau of Statistics Report on Education has shown.

Ironically, the very same impoverished northern youths jihadists of the shariah states, who are simply victims of poor governance and leadership, never looked at these areas of their lives, let alone committing their culprits to Jihad Al-Munaafiqen (against the hypocrites).

Rather, they were too enthusiastic and hasty to descend on a fellow: poor, struggling young man like them (Ahmad Usman) : who was alleged to had Blasphemed God by saying that, “Even if God comes down he would not oblige the release of an arrested suspect in his custody …” And he was consequently mobbed to death, without recourse to due processes of Shariah, thereby denying one of the foundamental beliefs of the Religion, in contradiction of the definition of Blasphemy as stated earlier above.

In another case of Blasphemy, Governor Nasir Elrufai: tweeted on 27th January, 2013; that, “If Jesus criticises Jonathan’s govt, Maku/Abati/Okupe will say he slept with Mary Magdalene. “

Since the year 2013 to date, no other person made this blasphemous statement, except Mallam Nasir Elrufai; yet in an audacious act of Haram against the the Qur’an 6:108 and against the Bible (Leviticus 24:16).

Interestingly, Christians did not go on rampage, kill or call for the head of Mallam Nasir Elrufai: because Christians have it on lesson, in another case of death penalty (an adulteress) brought to Jesus for judgement; Jesus said, “he that is without sin among you, let him cast a first stone at her. ” And all her accussers simple dropped their stones on the ground and left the woman unhurt (John 8:7). This amongst other things account for the calmness of Christians generally.

Surprisingly still, the poor northern Muslim youths jihadists, never saw the above statement by Elrufai as a Blasphemy against the Religion of Islam, let alone committing Elrufai to their ‘brand of jihad’ (like they do to others), as a consequence of his action. This can only mean that there is a whole lots of deliberate mis-education and manipulation of the northern Muslim masses; such that they are against themselves.

Suffice to state that, the average northern youth Muslims would rather kill their fellow poor struggling people in their desire to fulfill their obligations on Jihad, than to confront their ‘Munaafiqeens’ cum leaders, who care-less about Them and Their Religion, but to use Them and Their Religion for Personal patronage, for selfish gains, at the detriment of the good and benefits of their people, which today accounts for their state of all manner of social and economic misfortunes, in their Shariah States. Under this misdeed, both Allah and Muslims are betrayed, lying and promise breaking against the people are being done . These are very clear cases for Jihad Al-Munaafiqen.

Why are the Imams/Mallams/Preachers, not priming these youths to go against those who perpetrate bad governance and leadership, both political, traditional and religious: who do so much damage to the people, assault on jihad and the magasid?

This omission, as the Muslim Scholars would always say; undermines the very essence of Shariah: promotion and preservation of the common good and benefits, and the avoidance and protection from harm on ALL.

Finally, Religious Sermons that are not backed up with references in the Qur’an, Sahih Hadith or the Bible, only represents personal Views/Intents of such Preachers. Where such sermons may inspire violence, all relevant authorities should look into the activities of such Preachers and save the society.

If Jihad Al-Munaafiqen will be invoked and executed on all Muslim Leaders of the 12-Shariah States of Nigeria, the states’ region shall be a model of good governance and leadership, for the rest of Nigeria and Africa at Large. Will they?