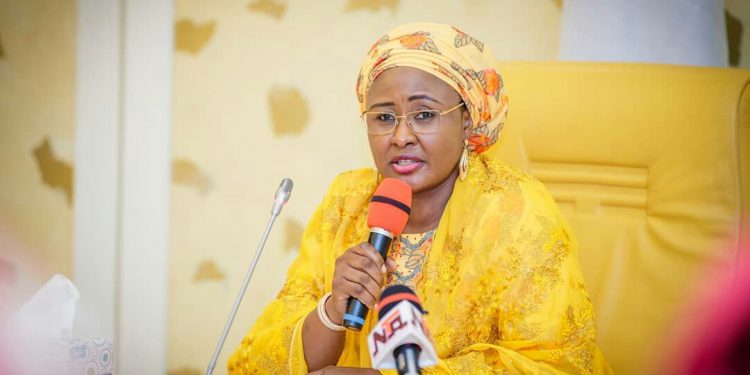 Angry protesting women and youth has accused the management of North East Development Commission (NEDC) of turning the commission which was established to rebuild and rehabilitate north east region Into a private company of president Muhammadu Buhari’s wife Aisha Buhari.

The spokeman of the protesting women and youth who were protesting in their thousands at the venue of foundation laying ceremony for 500 housing units for victims of insurgents told journalists that the commission was hijacked by the wife of the president to pursued her younger brother’s political ambition.

The housing units is located in Yola-South local government on the family land of the Buhari’s wife.

“Where we expected this project to cited is Madagali,Mubi-north, Michika,Hong and Gombi ,but the power drunk wife of the president hijacked it to her place”, he query.

Ribadu who described the actions of NEDC manegement as shameful, pointed out that the location of the housing units is not only a security risk to the intended occupants,but that due to the closeness of the place to Sabore hills which is the den of Kidnappers and banditry will ends up as private property of Buhari’s wife.

The protesters were blocked by security agents from entering the main venue of the ceremony not to embarrass the organizers.

While speaking at the occasion that was poorly attended, the Maneging Director of NEDC Alhaji Mohammed Alkali, said that out of the 500 housing units allocated to Adamawa state, the remaining 200 will be located in other cities in the state.

While laying the foundation of the 300 housing units,Governor Ahmadu Fintiri who dressed in a clean starch navy blue agbada commended the commission for complementing the housing policy of his administration.

He urged the commission to continue in it quest to rebuild and rehabilitate the north east region destroyed by insurgents.

We will not tolerate southern Kaduna massacars ...