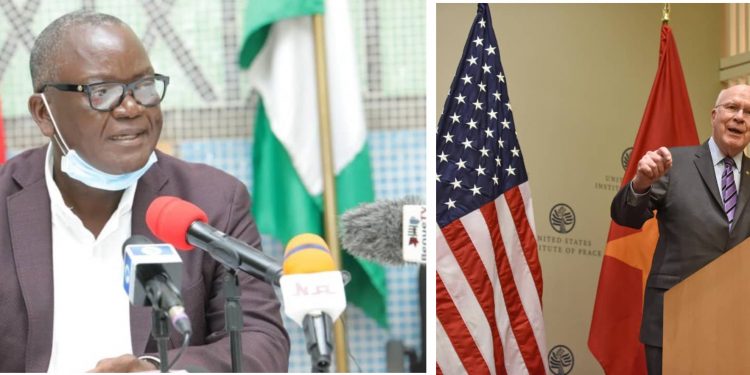 The United States Institute for Peace ( USIP) report on killings of innocent Nigerians has exornerated Benue state governor Samuel Ortom, who had consistently accused President Muhammadu Buhari’s, government of turning his back on those that voted him into office.

The spokeman of middlebelt professionals Dr. James Ali, on Wednesday said that the US agency report has revealed that the killings in Nigeria has gone up to 169 percent under the present administration due to lack of political will by the presidency to coordinate the security agencies for proactive military actions.

He said that governor Ortom has on several occasions reminded Buhari’s government that his government is defending those killing Nigerians because of his ethnic affiliation to the muderous fulani herders.

“Ortom who took the battle of defending the middlebelt region very high even at risk of his life, Ortom escaped attack on his farm located along Makurdi- Gboko road”, he stated..

He added,”the Benue state governor told president Muhammadu Buhari, that he is no longer the president of Nigeria,but president of fulanis his kinsmen”.

“Ortom in order to secure Benue state from fulani terrorists propenents who are parading themselves as herders, first enacted the anti-open grazing law which has now propelled southern governors to emulate the Benue state governor and started enacting thesame law in their various States to tackle Invaders”.

According to Ali, the USIP report has placed Ortom in position of a leader that can sacrifice his life for his people with looking back and that Nigeria can only become great if leaders like Benue state governor are in leadership positions.

The group has urged other leaders in the Middlebelt region to stand up and speak against the organised genocide going on in the region and in southeast, South-south and south-west, to register their anger to Buhari’s terrorists friendly administration.