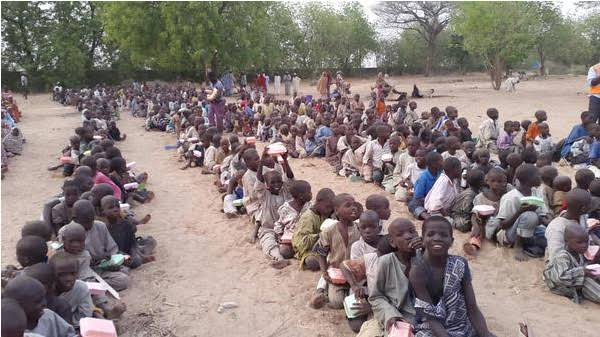 He said that Federal Government should hasten efforts to redeem its pledge that was made through the Vice President Prof Yemi Osibanjo to rebuild our destroyed communities.

The National Emergency Management Agency NEMA should realize that the over 1.5million displaced persons living in IDP camps in Benue are citizens of Nigeria who also deserve to live. Adequate care should be extended to them in the same measure it is being done in the North East.

The group urged the people of the state to support Dr Shio in his efforts to ensure that Benue IDP are Carter for comfortably and they are healthy.

“We watched with shock unfolding events since the patriotic appearance of Governor Samuel Ortom and other patriotic Nigerians on Channels TV. While every other Nigerian was applauding Governor Ortom for such a courageous and patriotic act, the Minister of Special Duties and Inter-Governmental Affairs Sen George Akume and his APC group in the Benue have embarked on all manner of antics to align with the failed Government of President Muhammadu Buhari to cause us more pain and ridicule us before the rest of the world. “

It’s quite disturbing that a serving Minister who has spent two years plus attending the federal executive council meetings without a memo on the suffering of the over 1.5million IDPs in his state and non to find a way to rebuild our destroyed communities will be going up and down in the presidential villa strategizing on how to attack our patriotic Governor just to please his pay masters who are out to kill us and grab our land.

It is equally sad that at a time when the entire country is heading towards the ranching revolution that has come to stay in Nigeria, a son of Benue who represents the state in the Federal Executive Council as a minister is busy calling for the continuation of open grazing and laying claim to grazing routes in Benue in order to satisfy his own selfish interest and please his paymasters.

Rather than offer the state an effective representation in the elite club of Ministers of the Federal Republic of Nigeria Akume has opted to wilfully and capriciously sow the seeds of discord, disaffection and ill-will between the President and Governor Samuel Ortom in order to curry favour with the President and, by so doing, brighten his chances of occupying the office of National Chairman of the APC.

Assuming, only for the sake of argument, that there is indeed substantial basis for Akume’s shameful tirade against Governor Ortom on the ground of the latter’s alleged disrespect for the person of Buhari, it still will not survive any rational litmus test. Now, let us interrogate this alleged basis:

Unfortunately, even the President and his handlers, and indeed the generality of Nigerians, especially citizens of Benue State, have a clear idea of what Akume stands for and what he represents. There is no need shutting the barn door when the donkey has escaped. It is an action in futility.

The Fulani people that he so cherishes and wants to compel all Benue People to be their friends are rated the fourth most dangerous terrorist group in the world by the Global Terrorist Index, yet, as long as the Minister and his APC members continue to get their pot of porridge, they don’t care if more human blood flows in the state.

Just recently, his best political ally and Leader of his party Ahmed Bola Tinubu came out strongly to support the ranching revolution in Nigeria. Is Akume more APC than Tinubu?

Was the Minister not in the country when senior APC leaders in the South West including members of the Federal Executive Council like him rose up to defend their people when they were attacked by these same Fulani militia that he is asking us to be their friends? The action exhibited by Yoruba leaders is what leaders of conscience and true statesmen do.

Just like his principal President Buhari who could only see the 1964 gazetted grazing routes as the only solution to ending Fulani attacks in Nigeria, Minister Akume is sadly hell bent on handling over our lands to the violent nomads. But we cannot be blackmailed in allowing our enemies who have taken responsibility of the killing of our people be our friends.

The Benue Youth Forum strongly frowns at the outing of the group that assembled in Abuja under the sponsorship of Minister Akume to draw conclusion on issues in Benue State. An enemy within is more dangerous than the enemy outside.

We call on the revered Benue State Council of Chiefs to swiftly take drastic action by placing heavy sanctions on Sen. George Akume and his co travelers to serve as deterrent to others.

As the umbrella body of Benue youths, we today publicly declare George Akume persona non grata! He does not represent the interest of our state. From today, anything he does at the Federal Executive Council is in his own personal and selfish interest and not in the collective interest of Benue people. We disown Akume and call on President Buhari to sack the Minister with immediate effect and replace him with a credible Benue son or daughter.

We will not accept sabotage from any son of Benue in the struggle to liberate our people. The objective is clear that we will protect our people with any commiserate measure of action taken against us since no one including our very own working with our enemies but have sadly become moles amongst us.

With the numerous patriotic concerns from distinguished Nigerians, we call on all Benue people to be on alert and be vigilant in our communities and should not hesitate to report any suspicious movement around their neighborhoods. It is now obvious that our enemies are living amongst us and we must redouble our efforts to be safe.

We commend Governor Samuel Ortom for always extending an olive branch to work with the opposition party in the state as can be seen by his invitation to their leaders to participate in the stakeholders meeting of our great state. Their refusal to attend has only exposed them to the Benue people that they have nothing to offer for the development of the state and that is why they can’t come to the table of development with other patriotic sons and daughters of Benue.

The Benue youths are solidly behind Governor Samuel Ortom and will stand behind him firmly and tall to defend our people. We pledge our unalloyed support to the Governor and his administration.

“We commend the efforts of security forces so far and we urge them to step up surveillance to protect Benue communities against killer herdsmen to enable our people who are living in IDP camps for over three years return to their ancestral homes safely.”