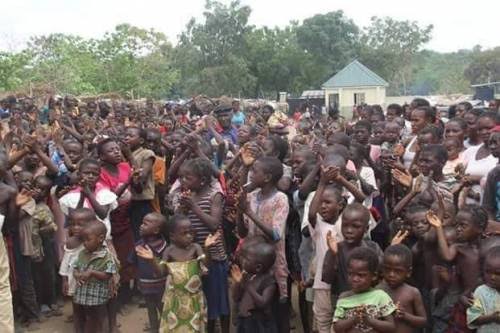 An inmate in one of the Internally Displaced Persons (IDPs) center in Benue State, Mr. Bemshima Peter is unhappy with the increasing numbers of IDPs which is now estimated to be over 1.5 million people living in various camps in the State.
Peter who was dislodged from his community by insurgents known to be killer fulani herders said the increasing number has overstretched government and life has become unbearable.
“We don’t get help from anywhere, government is overstretched and we are dying of hunger, disease and our girls has resorted to prostitution to survive”, Peter told our correspondent on Friday.
The inmate who spoke out of frustration said children are dying on almost daily basis and nobody cares.
Aside losing many relations, the middle aged Peter, said he also lost his means of livelihood. Although grateful to God for sparing his life, he is pained that IDPs are abandoned to live like refugees in their own country.
The story of the children in the camp is not different. Their education is not only truncated but their future bleak. No fewer than 1,176 of them were in primary school while 684 older ones were in secondary school are out of school, Governor Samuel Ortom had earlier stated in one of his broadcast.
Ortom had said the state is currently facing the worst humanitarian crisis in recent time with over 1.5 million IDPs, arising from ceaseless attacks on communities in the state by armed herdsmen

He had called on the federal government to live up to its responsibilities by supporting the state to cater for the needs of the IDPs.
Ortom had lamented that the Benue State government has been overwhelmed and unable to cope with the situation and urgently needed help to cater for the needs of the IDPs
Also, in a chat with our correspondent, another internally displaced persons Mrs Erdoo Tersor a nursing Mother in one of the camps narrated their plight, listing the challenges to include lack of accommodation, security, toilet facilities and above all, health care.
According to Tersor, six IDPs died in their camp recently because they had no access to health care facilities, while more than 25 women delivered their babies without any medical attention. Three of the babies reportedly died during delivery.
Tersor said the IDPs would have a sense of belonging only when the federal government provides them with the necessary amenities.
“As of now, I do not think we are Nigerians. We will become Nigerians when the government and other good people make us to feel like Nigerians”, she lamented.