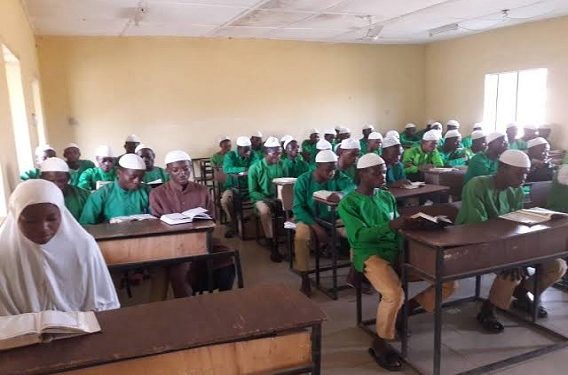 The Senate is seeking the revival of Almajiri schools built by former President Goodluck Jonathan.

The Senate further revealed that there is a need to integrate Almajiri education into modern educational system in the country.

Ahmed Lawan, the Senate President, made this disclosure during plenary on Thursday, March 12.

He also lamented that out-of-school children are a big challenge facing Nigeria as a nation.

Specifically, Lawan insists that the problem has constituted both social and security challenges to the country.

The Senate position was revealed in a motion on “The Need to Integrate Almajiri Education into Modern System of Education in Nigeria.” It was sponsored by Senator Adamu Aliero (APC – Kebbi Central).

According to Aliero, “We have more than 14 million out-of-school children. Most of them being Almajiri roaming the streets of our major cities in Nigeria begging for alms and food.”

He noted that the past administration of Goodluck Jonathan embarked on a laudable project by building Almajiri integrated model schools; in which the Almajiri children were enrolled and given both Islamic and Western education.

However, Aliero lamented that currently, “some of the structures are either laying fallow or put into uses other than what they were originally intended. Also, some of the facilities in the Almajiri Model Schools are already decaying; as they have never been put to use.”

He further insisted that Almajiri happens to be one of the persons covered by the UBE Act 2004; for the purpose of provision of basic education.

Meanwhile, Lawan said “We all know that the out-of-school-children are at the moment a big problem to us as a country.

“They constitute not only social problems, but also security problems to some extent.

“Therefore, it is our responsibility to do whatever we can to ensure that they are enrolled in primary and secondary schools.”

In his contribution, Senator Sabi Aliyu Abdullahi (APC – Niger North) emphasised that the quest to address the problem of out-of-school children should be one of the major legislative agenda of the Ninth Senate.

Bill Gates is Stepping Down from Microsoft ...