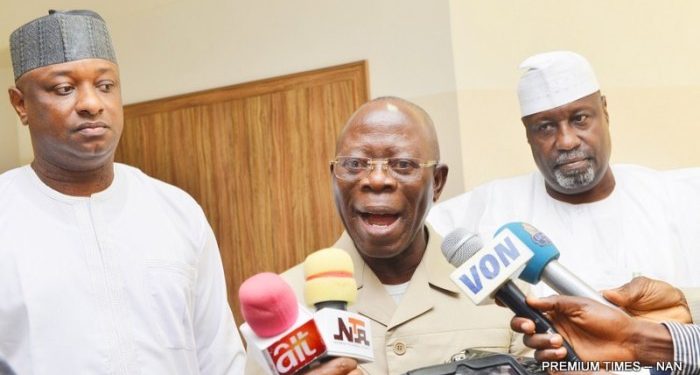 Adams Oshiomhole, the national chairman of the All Progressives Congress, APC, says the ruling party is not supporting any political party in Rivers State.

He stated this during his appearance on the latest edition of Channels Television’s Hard Copy which aired on Friday, March 29, 2019

The APC chairman said he was not aware of an endorsement of any governorship candidate in the state since his party did not participate in the exercise.

“APC has no governorship candidate in Rivers State. That is not a secret I am disclosing to you. The court has already denied us that,” he noted.

“And if there is going to be any alignment, I will know. I can’t know something and choose not to know it. That has never been discussed with me or with any of the members of the National Working Committee at any level.”

His statement followed reports that a faction of the APC in Rivers adopted and supported Mr Awara Biokpomabo, the governorship candidate of the African Action Congress, AAC, in Rivers.

The adoption was a result of the Supreme Court ruling which upheld the nullification of the APC primaries in Rivers, thereby preventing the party from participating in the elections.