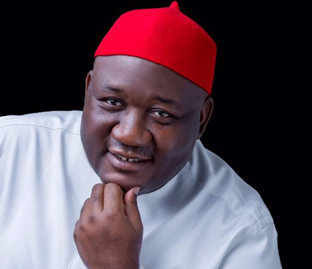 The crisis in the Imo state chapter of the All Progressives Congress APC has continued to linger with no apparent end in sight. In this interview, Senator Benjamin Uwajumogu who last Thursday resigned his appointment as secretary of the National Convention Planning Committee of the party said the zone has now disowned the Imo state governor, Rochas Okorocha as its leader. Excerpts:

Why exactly are you against your governor?

Our opposition to that is something that is based on principle; based on the fact that 95 percent of Imo citizens and indeed south easterners are not happy with what is happening in Imo State. Southeast citizens are ashamed that the only state that we, APC, have in the region is being run the way we see in the last three years, and for me, I did not have a choice than to detach myself from that government.

You have resigned as the secretary of that committee. Do we take it that you are stepping out completely from the committee?

I am still a member of the committee. I have commitments towards the graduation of two of my children. I will do my best within the period before I travel out for that graduation and I will continue to render services to the convention committee.

Don’t you think your resignation could cause problems for the party which is still trying to reconcile some aggrieved groups?

Well, this is a political development. Anyhow you look at it; people will also insinuate certain reasons. Some people, especially from my state, are promoting the view that I was removed because of fraud.

I am about to send my records to the chairman of the committee and the chairman of the party because ever since we came, we have received a total of N13 million. That also accounts for all the hotels that we have rented, all the meetings that we have had and every other expense including office equipment and working tools. So, when people say that I have been removed because of fraud, I laugh.

However, as I said, the congresses in Imo State have been conducted; they have been adjudged as successful and peaceful in Imo State despite the thugs that the governor brought. Nobody was killed, nobody was shot, and the NWC has confirmed this.

So, I do not see how those congresses would have affected my decision. I have only said that I am no longer the secretary, now that I have resigned, I can only hope that my governor, Rochas Okorocha will spend more time in Imo State attending to the various issues that he has created for himself because, in the last two weeks, he has been here in Abuja running around for the convention and trying to ensure that he puts only people that are favourable to his policies.

And I will like also to state that last Thursday, the entire south-east region held a meeting attended by south-east leaders like the former Senate President, Ken Nnamani, former Governors Jim Nwobodo of Anambra, Sullivan Chime of Enugu, Orji Uzor Kalu of Abia, Martins Elechi of Ebonyi, Senators Hope Uzodinma, Ogbuoji, Andy Uba, myself and many other past and present senators from the zone including Ararume, Chris Adighije and all the state executives.

Each state spoke on the position they have taken on the re-election of our candidates. They spoke and supported the three current members of the NWC namely Osita Izunaso, George Moghalu and Emma Eneuku. They supported the re-election of our current NWC members because of the good work they have done except Gov. Okorocha who refused to come because he knew very well what was going to happen at the zonal meeting.

In Igbo land, we say one person cannot cook food for the entire populace because if you do that, the food will not be enough, but when the entire citizens of a community now cook for one person, there will be disaster, and that is what is happening in the Southeast.

It is very clear today that this is no longer an Imo issue but a south-east issue and I am very happy that Nigerians are seeing this. It is very clear now that the entire south-east has lost confidence in the leadership of Rochas Anayo Okorocha and all we are asking is that Nigerians should take note that we no longer have him as our leader. My appointment was by the NWC, and nobody has asked me to leave this position.

The NWC met yesterday, and there was nowhere in their meeting where I was asked to resign or to leave the position. It is a decision I made by myself. However, in any decision you take, there must be political consequences. I am also using this opportunity to inform Nigerians that before now there were speculations that my appointment would compromise the convention because even though the governor of Imo state is not running for any NWC office, he has some horses in the race and there was this speculation that my being there would not give those his horses a level playing ground.

But having resigned now, nobody can accuse me of not providing a level playing ground for candidates that may wish to run for any of the offices.

Can we describe your exit as a trade-off to assuage the feelings of Gov. Okorocha who had reportedly threatened to dump the party?

This started more than two weeks ago and it is just a coincidence that I had made up my mind to leave at this time and I am just hoping that now that I have left, he will return to Owerri where he was voted to do the job because he has abandoned his duties. He has 27 general hospitals that he claims he has completed but I understand that they have been overtaken by weeds.

He has 1, 000km of road that has created huge erosion in various communities in Imo State. In fact the only functional hospital that we have, a specialist hospital, he willed it to himself and today that hospital is not functional. So, today, Imo State is a massive basket of fraud and I am very sure that the EFCC have their records of him and we will wait for them to do the needful by the time he leaves this position because I am sure that he has a lot of questions to answer.
By Omeiza Ajayi