Reuben Abati: The Rise Of Liberia’s George Weah [MUST READ] 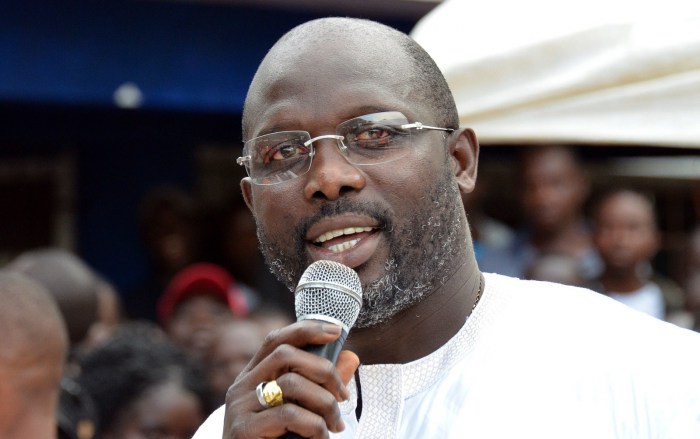 George Weah’s emergence as Liberia’s President-elect after the December 26 run-off election generated considerable interest among Nigerians for a number of reasons.

Number one is George Weah’s popularity. The first African footballer to win the Ballon D’or, FIFA Player of the Year, three-time African Footballer of the Year, ex-Monaco, ex-Paris Saint-Germain, ex-AC Milan, Chelsea, Manchester City, former protégé of Arsene Wenger, virtually every football fan in Nigeria had a feeling of connection with the Liberian football star turned politician and President-elect. In Nigeria, football is the most uniting element within the public space; thus, once it became apparent that George Weah was set to become the 25th President of Liberia, the social media in Nigeria went into an overdrive. The Liberian President-elect probably got more congratulatory messages from Nigerians on Facebook and Twitter.

Number two: Weah’s victory came at a time when there was scarcity of good news in Nigeria. As Christmas 2017 approached, Nigeria suddenly found itself in the throes of an embarrassing scarcity of fuel, which left many motorists stranded and Yuletide activities effectively crippled. An already frustrated citizenry seemed helpless as government officials and oil marketers traded blames. The former lied openly in the face of shocking revelations about the politics of fuel subsidy. For the football community, George Weah’s victory brought some measure of good news. It was as if their favourite footballer had scored a special goal.

Number three reason is the relationship, which both George Weah and his Vice-President-elect Jewell Howard Taylor have established with Nigeria. Weah, in the company of Prince Yommie Johnson, who once lived in Ikoyi, Lagos had visited Pastor Temitope Joshua of The Synagogue Church in Nigeria before the election. Pastor Joshua seems to have a reputation across the African continent and beyond for being able to assist persons to become President. Weah’s victory was immediately linked to Pastor Joshua and the prayers he had offered to God on his behalf. Ms. Howard Taylor is the former wife of former Liberian President, Charles Taylor, now in prison for war crimes. Charles Taylor was in exile in Nigeria before his trial at The Hague. His wife, now Vice President-elect has maintained very strong relationships with Nigeria, indeed one of the first persons to take to the media to celebrate her was her Nigerian fashion designer and her husband.

Number four reason and perhaps the most telling is: the-grass-to-grace-story, the-slum-to-palace, football-pitch-to-Presidential-Villa, inspirational trajectory of George Weah’s career. The new President-elect represents a symbol of hope and triumph over adversity for not just young Liberians but other young persons across the continent, especially in Nigeria. I have heard many young Nigerians profess in the last week, that “if George Weah can make it, they too can make it.” Raised in a slum, from the poorest parts of Liberia, George Weah’s qualities were first strikingly revealed through his football career. He tried to give back to his country as an international football star, and once during the civil war, he single-handedly funded his country’s national soccer team.

He retired in 2003. In 2005, he returned home to run for the Presidency of Liberia. His opponent was the Harvard-trained public administrator and ex-World Bank accountant, Ellen Johnson-Sirleaf. Weah was the people’s preferred choice (28.3 to 20%) but the Presidential election went on to a run-off. Weah lost the second round once the public was reminded that he was just a gifted footballer without even a Secondary School Certificate! Weah took this as a challenge and decided to seek formal education. He sat for the Secondary School Certificate Examination in 2006 at the age of 40. He proceeded to the United States and got a degree and a Masters’ degree. Then he returned to Liberia to pursue his dream afresh.

In 2014, he was elected to the Liberian Senate, beating Sirleaf’s son, Robert, to the Montserrado County seat. In 2017, he was elected President, twelve years after his initial attempt and as Johnson- Sirleaf’s successor. Among young Nigerians, he is the very paragon of determination and ruthless single-minded volition. Young Nigerians are so unhappy; they are slaves of inspirational stories such as this. They troop to churches in large numbers because they are looking for hope and motivation. Above all, they like the fact that George Weah is just 51. It is the kind of age bracket many Nigerians want for their next President. Contemporary circumstances have made them wary of making the mistake of electing into office anyone who may be too old to govern.

To this situational and relational connection with the just concluded Liberian Presidential election should be added the fact that Nigeria played a major role through the ECOWAS Ceasefire Monitoring Group (ECOMOG) during the two Liberian civil wars (1989 – 1997; 1997 -2003). Many Nigerian families are forever linked to Liberia through ECOMOG. Many Liberians also came to live in camps in Nigeria and forged life-long relationships. This should further draw attention to one point: Elections or democratic processes in Africa are no longer isolated events. In many cases, there are cross-boundary factors and influences and the much sought-after African integration and cooperation is far more effective at the level of person-to-person diplomacy. The failure of African governments to promote this by providing the infrastructure and the political will, beyond seasonal rhetorical talk, is part of the bane of the integration process in Africa.

So much for why the election in Liberia has caused notable excitement in Nigeria; democracy is as much about imageries as it is about realities. When he takes the oath office on January 22, 2018 to become Liberia’s 25th President, George Weah will have to deal with many realities. He came to power on the crest-wave of popularity. Liberia’s youthful population is on his side. He is their hero. But he will need more than popularity to rule that country of 4.5 million people which has a history that is even far more complex than that of Nigeria.

In an acceptance speech that came a bit late, George Weah spoke a lot about God, trip to Jerusalem, reconciliation, appeal to Liberians in Diaspora to come home and how his first task would be to deal with corruption. The details of what else he intends to do, he says, will be unveiled at a later date. The general tone of that acceptance speech shows President-elect George Weah may still have a lot to learn.

He campaigned on the platform of change. Popularity will not guarantee that change. In the past 12 years, President Ellen Johnson-Sirleaf has managed to ensure post-conflict peace and stability in Liberia and has raised the profile of her country in the West African sub-region. Her autobiography – This Child Will Be Great (2009) may sound pompous but she is definitely ending her tour of duty as the first great President in Africa’s oldest democracy: Nobel Prize Laureate, first African woman President, under her watch, Liberia’s external debt was written off, some war-time infrastructure were repaired and she brought in investors, particularly the Chinese. Liberia also regained her voice within the international community, even if Mama Ellen has been accused of being too pro-American. It is also under her watch that Liberia has recorded the first democratic transition since 1944, and despite the initial hiccup of a run-off (recent Presidential elections in Liberia have ended with a run-off – 2005, 2011 and 2017), the 2017 election still ended peacefully. George Weah should see the need to build on her legacy.

There are expectations, not just from the young Liberians who voted for him, but also across the continent. The Liberian economy remains weak, and far removed from its potential, given the country’s rich resource base; unemployment is double-digit, infrastructure deficit is high. The process of reconstruction initiated under Sirleaf needs to be fast-tracked to provide jobs for the people and to reassure them that their country is truly on the path to restoration and progress. When the people hear the word “change” during political campaigns, they imagine that it is real and immediate. In recent elections in Nigeria, Ghana, Gambia, and now Liberia, the people’s democratic engagement has been anchored on this rhetoric of change. It is also what the protesters in Cameroon, Togo and DR Congo are currently demanding. To promise the people change and deny them that change is to betray their trust and goodwill.

The George Weah Presidency is the product of enormous goodwill. George Weah should therefore realize, early enough, that the coalition that has brought him to power is not a coalition merely in name; it is a coalition with implications that cannot be taken for granted. Senator Jewell Howard Taylor led her party to join the George Weah group to produce the now formidable Coalition for Democratic Change. Prince Yommie Johnson who had been in another camp eventually joined the coalition to ensure victory. But perhaps Vice President Joseph Boakai also provided the needed oxygen of sportsmanship when in his concession speech, he decided to put Liberia first. He said: “I reject any temptation of imposing pain, hardship, agony and uncertainty upon our people. My name will not be used as an excuse for one drop of human blood to be spilled in this country.” This Goodluck Jonathan-inspired speech is most instructive. President Johnson-Sirleaf also deserves praise for allowing democracy to run its course. It is not always that African politicians agree to lose gallantly and choose to be magnanimous in either victory or defeat.

In The Gambia, Yahya Jammeh had a change of mind. In Cote d’Ivoire, Laurent Gbagbo forced the issue and ended up at The Hague. In Kenya, Raila Odinga, leader of the NASA opposition is about to start a shameless dance. He has again dismissed the outcome of the last Presidential elections in that country as unacceptable. In January 2018, he says we should expect “civil disobedience, peaceful protests, non-cooperation with and resistance to an illegitimate regime in addition to People’s Assemblies.” This kind of tendency to see politics as a zero-sum game is the biggest challenge to the democratization process in Africa.

George Weah has promised to fight corruption. In 2010, Transparency International labeled Liberia the most corrupt country in the world. President Sirleaf sacked a few Ministers but seven years later, the subject remains an embarrassment. The crisis persists. Weah, however, must resist the temptation to turn his anti-corruption campaign into a McCarthy-style witch-hunt/persecution of his predecessors in office.

Liberia is indeed a complex country. It remains divided along ethnic and traditional lines. Samuel Doe triggered a crisis with his victimization of traditional power centres and the ethnicization of his government when he filled virtually every position with members of his Krahn group. President Johnson-Sirleaf has been similarly accused of nepotism, filling positions with family members and friends and having the temerity to justify her decision. George Weah is expected to be a unifying figure. The people are hoping that he would help transform Liberia into a “level playing field”: create open and equal access to opportunities, bridge the yawning gap between the rich and the poor, pave the country’s roads, make electricity accessible to the majority and create jobs for the unemployed.

Those who voted for him are used to his dexterity on the football pitch; although football and political leadership are not the same things, Weah as President will need the same passion and all the skills of a footballer. He must hit the pitch running, make use of every opportunity, work hard, keep his eyes on the ball, play as a team, display leadership, and score goals. The ball will be passed to him on January 22. He should not disappoint.

Reuben Abati was spokesperson and special adviser, media and publicity to President Goodluck Jonathan (2011 – 2015). A former chairman of the editorial board of The Guardian, Dr. Abati is one of the most respected columnists in Nigeria. He writes his syndicated column twice a week. He tweets from @abati1990.