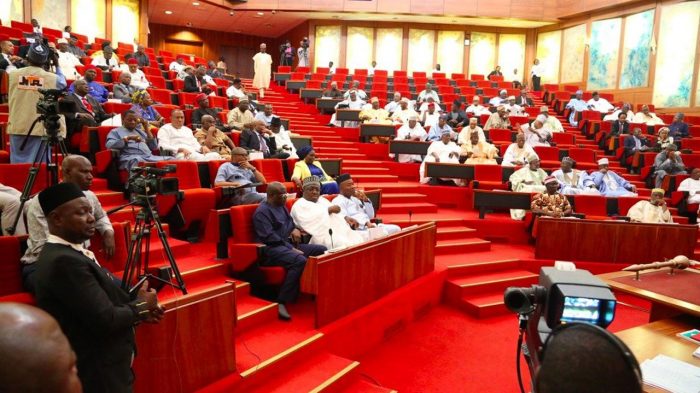 The Senate on Wednesday announced that it would probe alleged feud among Economic and Financial Crimes Commission (EFCC), Directorate of State Security (DSS), and National Intelligence Agency (NIA) over operational issues.

The face-off was said to have stemmed from EFCC’s attempted arrest of former director-generals of DSS, Ita Ekpeyong and NIA, Ayodele Oke.

The senate said it would set up an ad hoc committee to investigate the matter within two weeks.

The resolution followed a motion by Dino Melaye (APC-Kogi), drawing attention of the upper chamber to alleged resistance by DSS and NIA officers on Tuesday of the attempt to arrest Ekpeyong and Oke.

Presenting the motion, Melaye said that it was expedient for the senate to wade into the matter in view of its threat to national security.

“Our responsibility as a senate is to ensure the respect for rule of law. The media have been awash with a disastrous situation that happened yesterday. The EFCC went to the resident of the former DG of the DSS, Mr Ita Ekepyong, to effect arrest and the men of the DSS stopped the EFCC from arresting him. The development created gridlock in the area as people living in theere were either not allowed to gain entrance to their residents or to move out. Same yesterday, the EFCC was stopped from arresting the former DG of NIA, Mr Oke, and the officers of the Nigeria Intelligence Agency stopped that arrest. We will recall that the same DG, DSS, had written this senate before now on the Acting Chairman of EFCC, Mr Ibrahim Magu. We are not here to lay blame on anyone but to say Nigeria has been embarrassed before the international community for two sister agencies to be involved in fisticuffs,’’ he said.

The lawmaker said that the incident was a recipe for national disaster which should not be allowed to continue.

He stressed that Nigeria was not a banana republic and as such, the rule of law must be respected by all.

Melaye pointed out that “if two security agencies will engage in this shameful act, which involves threat to life, what will happen when two civilians are fighting. This matter should not be taken lightly as we cannot allow Nigeria to be ridiculed on a daily basis by those who are supposed to defend her integrity. I call on the senate to investigate this matter and ask the leadership to wade into the situation immediately.’’

Contributing, Deputy Minority Whip of the Senate, Biodun Olujimi, said it was a dangerous situation that should be nipped in the bud.

According to her, it is shameful for security agencies to be involved in such a fight.

“We never thought a day like this will come but we saw it coming. Right now, we have a situation where no one is in charge of anything. I support the motion. The truth is that you cannot go to the house of a security agent, a man who has kept the secret of this country and arrest him like a chicken. Remember we rejected Magu but he is still there. The senate is being defied; the Presidency has to be called to order. Somebody has to be in charge,’’ she said.

On his part, Ahmed Lawan, supported the motion, saying “what Melaye has presented is seeking that the senate investigates what happened and it is one rare motion. However, I want to say that President Muhammadu Buhari is in full control of the government. Even when he was away to attend to his health, the Vice President was in control. There was never a vacuum. In my opinion, could it be that the EFCC did not get the right document to effect arrest and if they did, our investigation will reveal,’’ he said.

Lawan called for calm, assuring that the matter would be investigated.

In his remarks, President of the Senate, Bukola Saraki, urged the lawmakers to remain calm while the ad hoc committee probed the development.

He said “anything we say now will be based on assumptions and not facts. The most important thing now is the prayer and it will guide us on the way forward.’’

The motion was unanimously adopted.