How Wike, Amaechi turned traffic altercation to power play for control of Rivers 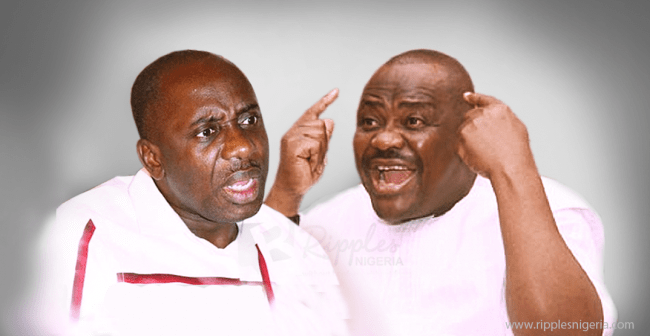 Governor Nyesome Wike of Rivers State and his immediate predecessor, Rotimi Amaechi have once again taken their quest to assert control over the state to another level.
Both men on Saturday were involved in a traffic altercation, but turned it into a power play to justify who should be in charge of the politics of the state.

Their security convoys and details did not miss the chance to create havoc in efforts to please their principals, while drawing their guns, leading to allegations from both camps that it was a plot to assassinate the governor, and Amaechi, who is the current minister of Transport.
Both men have in the past two years been at loggerheads over who should be in control of the politics of the state ever since Wike won the governorship election in 2015, to the chagrin of Amaechi.

Although both men were formerly in the Peoples Democratic Party (PDP) Amaechi decamped to the All Progressives Congress (APC) in the run up to the 2015 general elections after he fell out with then President Goodluck Jonathan.
Wike, and Amaechi have since that time seemingly declared war on each other, accusing each other of virtually everything, in efforts to assert their control over the politics in RIvers State.

On Saturday, while on different missions around the state, their convoy came across each other at Nwanja Junction on Trans-Amadi road. This led to a clash by their security details, and shots were allegedly fired.
According to the account by the Spokesman to the governor, Simeon Nwakaudu, the governor was on project inspection in the state, when SARs personnel and soldiers in the minister’s convoy hit the governor’s escort rider and attacked the policemen in the pilot car.
Nwakaudu added that one of Amaechi’s aide-de-camp identified as Debewari supervised the alleged attack “which included damage of cameras held by journalists”.
He further alleged, that “The minister of transportation had over 50 SARS personnel, soldiers and mobile policemen in his motorcade”, and that the attempt on the governor’s life was unsuccessful, as he was not hurt.
On his part, Amaechi was said to be on official tour to Rivers State when the incident occurred.
An associate of Amaechi, Prince Tonye Princewill, who was with the minister in his bullet-proof vehicle, claimed it was an attack aimed at assassinating the minister.

He said Governor Wike’s Dispatch Rider pulled a pistol to assassinate Rotimi Amaechi but missed his target after which Amaechi’s ADC, Debiwari intervened to save the Minister from further assassination attempt.

According to Princewill, “I am at a loss if this was not an assassination attempt on the Minister, somebody should explain to me in a clearer sentence why did the Wike’s despatch rider failed to stop the two security vehicles of the Minister which had already crossed but decided for whatever reasons to block the vehicle in which the Minister was driving?”

Tonye Princewill went further to ask, “why did an attempt by Amaechi who was behind the steering to navigate his vehicle out of danger was accosted by two security men from the Governor’s convoy who had pulled out their pistol and gun to shoot him. Why did these men of darkness after realising that the vehicle that the Minister was driving was a Bullet Proof resorted to hitting the jeep with the butt of their guns and in the process broke the right driving mirror and attempted to break Amaechi’s windscreen and after which he pulled his pistol to kill Amaechi?”

Also, the APC RIvers State chapter in a statement by Chief Eze Chukwuemeka Eze, SSA Media and Public Affairs Consultant to the APC Rivers State Chairman, Dr Ibiamu Davies Ikanya further alleged that after the failed attempt to kill the Minister, his escort Team was physically assaulted by the CSO Government House, SP Promise Wosu and Governor Wike along Trans Amadi road, Port Harcourt with the FSARS operatives on the Minister’s convoy dislodged and forcefully disposed of one of their AK 47 Rifles.

The party continued, “the entire world is aware of how dangerous Governor Wike is and how he has killed many APC members to usurp powers in Rivers State and how he has supervised and turned Rivers State into Rivers of blood but to attempt to assassinate a Minister of the Federal Republic of Nigeria in the mode of Amaechi, his benefactor and predecessor is to us is an affront not only on our nascent democracy but an attempt to truncate our hard earned democracy and to plunge this country into a chaotic situation which consequences may be unimaginable.

“This is a dangerous trend which if not nipped to the bud and arrested may jeopardise the current peace pervading the Niger Delta region at the moment”.