Osinbajo: The Lies Of A Poisonous Dwarf And Unrepentant Son Of Perdition (READ) 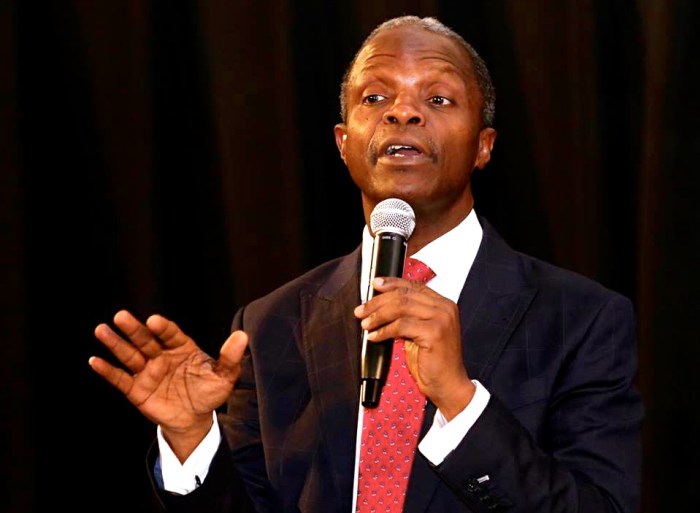 “100 billion naira and $289 USD million was withdrawn in cash by President Goodluck Jonathan two weeks before the presidential election ostensibly for security. This was unprecedented stealing and it led to the economic recession that we are suffering today”.

Sadly the wild, baseless and frankly absurd allegations and willful and premeditated display of perfidy did not stop there.

A few weeks earlier Osinbajo had said the following:

“President Goodluck Jonathan did not put in place ANY infrastructural development in his last 5 years”.

This is yet another unmeritorious and unworthy clangger!

The truth is that I am fed up with this despicable little man’s horrendous lies. If he is not lecturing, talking down to or insulting the Christian Association of Nigeria (CAN) and Christian leaders or trying to convince the world that there is no islamisation agenda in Nigeria he is resorting to the most disgusting and shameful mendacities.

The truth is that there is nothing worse or more repugnant than a pernicious liar and a sanctimonious and self-serving dwarf that thrives in double standards and hypocrisy.

Instead he always saves his perfidy and lies for President Jonathan and the leaders of the PDP.

He never condemned the slaughter of thousands of Christians (including clerics) and hundreds of Shiite Muslims in the north.

He never condemned the ethnic cleansing being carried out by the Fulani herdsmen.

He never condemned the relentless persecution and violation of human rights and civil liberties that the opposition have been subjected to for the last two and a half years.

He never condemned the northernisation of governance in Nigeria and the fact that his boss President Buhari had directed the World Bank to only develop the north and to ignore the south.

He never condemned the fact that southern Nigeria and the Midddle Belt are effectively under occupation.

He never condemned the fact that every single security agency in the country and every branch of the Armed Forces except for the Navy is headed by a northern Muslim.

He never condemned the fact that the army attacked Nnamdi Kanu’s home, murdered 26 people in cold blood, killed his dogs, burnt his cars and “disappeared” him.

He never condemned the fact that the wives and children of opposition members and perceived enemies of the government are being killed, detained, maimed, rounded up, tortured and harrased by Buhari’s goons and security agencies.

He never condemned the fact that his own colleague, a female pastor of the Redeemed Christian Church of God (RCCG), was murdered in cold blood by muslim fundamentalists in the north just over one year ago.

He never condemned the censorship of the press, the intimidation and blackmailing of newspaper publishers and editors and the threats issued against the owners of radio and television broadcasting stations.

He did not condemn the planned clampdown on the social media over the next few weeks and months.

He did not condemn the systematic and insidious adoption of a culture of fear and silence which is being foisted upon our people.

He did not condemn the bombing of predominantly Christian IDP camps by Muslim Air Force officers.

He did not condemn the wholesale slaughter of the innocent Christian indegenous populations, including women and children, in Plateau state, Benue state, Southern Kaduna, Kebbi state, Borno state, Adamawa state and elsewhere in the north by Janjaweed-like Fulani militants.

I could go on and on.

Osinbajo, our supposedly learned, God-fearing, pious, humble and righteous Pastor and Professor of Law, has not deemed it fit to condemn anything that is evil or reprehensible that goes on in our country!

All he did and has done was go around calling Buhari his father, running his mouth off against CAN, the Church and Christian leaders and insulting President Jonathan and other members of the resistance and the opposition.

The truth is that I have lost all respect for this man. That is a pity because I have known him for over thirty years and have always held him in high esteem.

Yet sadly that has all changed because I never knew that below the surface he was nothing more than a gutless coward and quisling who, like Christopher Marlowe’s Dr. Faustus, had sold his soul to the devil for knowledge and power.

I never knew that he was the sort of man that would sit by idly and quietly whilst his own southern people and members of his own Christian faith are being humiliated, cheated, persecuted, enslaved, marginalised, slaughtered and, in some cases, being subjected to ethnic cleansing.

As far as I am concerned Vice President Osinbajo is not just a deceitful, mendacious and poisonous dwarf but he is also a lying imp and devlish little midget who has been overwhelmed and possesed by a stunted, crude, cowardly and servile evil spirit.

The truth is that he would kill or sacrifice anyone, no matter how close they are to him, just to please his boss Buhari.

I stopped regarding him as a believer the minute he bowed his head and went on bended knee before Baal’s Prophet and the minute he opted to be the running mate to the greatest enemy of Christ’s Church in Nigeria.

The fact of the matter is that, in my view, the Vice President is not a Christian let alone a Pastor. He ceased being one long ago.

Like Judas Iscariot he has betrayed Jesus Christ in return for thirty pieces of silver and he has assisted those that have continuosly insulted and sought to undermine the Christian faith in Nigeria.

His is nothing less than a hideous, horrific and monuemental Shakesperean tragedy that shall not end well.

Permit me to close with the following.

The lack of sense that some commentators in Nigeria consistently display never ceases to amaze me. They claim that it is fair game for the likes of Osinbajo to keep calling Jonathan and opposition leaders looters and thieves but that it is wrong, disrespectful and unfair to call him a lying dwarf for saying so!

This is nonsense. And those that hold that view should mark this: the more bricks Osinbajo and his boss throw at us the more they will get in return.

We cannot be intimidated by them and we shall not be cowered into silenced.

Being a Vice President is one thing but allowing yourself to degenerate into a willing tool and servant of Baal and debasing yourself into what is nothing more than an unrepentant son of perdition is quite another.

I suggest that both Osinbajo and Buhari leave Jonathan and the PDP alone and clean up their own filthy mess! They have just over one year left to do so.

Remember how it felt when Babangida detained ...