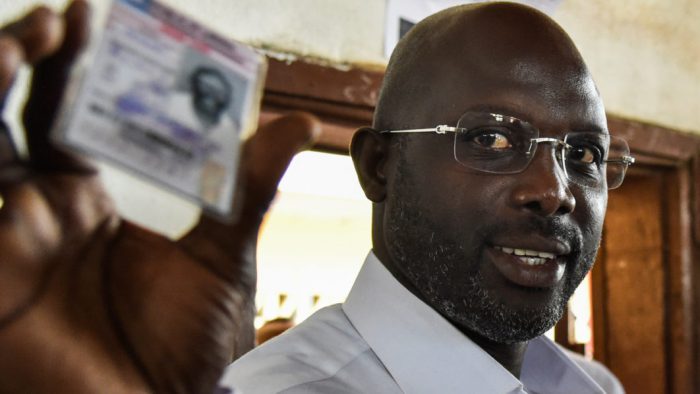 George Weah of the Congress for Democratic Change (CDC) retained his lead as the second batch of provisional results of Tuesday’s presidential elections in Liberia were released on Friday, October 13, 2017.

According to figures read out by Mr Jerome Korkoya, Chairman of the National Elections Commission (NEC) Weah remained ahead with 39 per cent of the polling places so far processed.

Vice President Joseph Boakai of the ruling Unity Party retained his second position with 31.1 per cent of the votes.

“Starting with Mr George Weah of the CDC, of the total number of places we have processed, he has obtained 240,750 votes; that would represent 39.6 per cent.

“He would be followed by Mr Joseph Boakai of the Unity Party. He has obtained 160,975 votes, and that would represent 31.1 per cent.

“Mr Charles Brumskine of the Liberty Party has obtained 48,219 votes, and that represents 9.3 per cent.

“Mr Alexander Cummings of the ANC (Alternative National Congress) has received 34,550 votes, and that represents 6.7 per cent.

“Mr Prince Johnson of the MDR (Movement for Democracy and Reconstruction) has received 24,948 votes, and that represents 4.8 per cent.’’

Korkoya said as at the time of Friday’s briefing, results from 1,817 polling places had been processed out of the 5,390 polling places in the country.

“A total of 547,965 votes have been processed from the polling places we just mentioned, and that would represent 74.58 per cent of the total number of voters registered in those poll places, that is the 1,817.

The News Agency of Nigeria (NAN) reports that there are 20 candidates in the presidential race.

A winner needs 50 per cent plus one of the total votes cast to avoid a run-off election.