ATIKU: I’m not corrupt, anyone with evidence should petition the courts 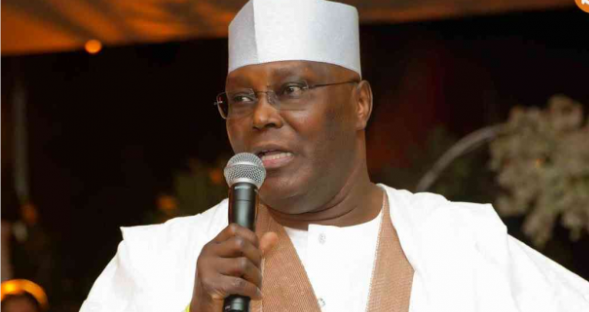 Former Vice President Atiku Abubakar has decried recurring allegations that he was corrupt, claiming that no one has been able to prove that against him. He also said that he would fight corruption better if given the opportunity to lead the country.

Atiku, a leader of the ruling All Progressives Congress (APC) has been visited recently with barrage of allegations, including being accused of corruption, plotting President Muhammadu Buhari’s failure, and being an enemy of his own party, among several others.

The attacks followed the recent declaration by the Minister of Women Affairs, Aisha Alhassan, that she would support Atiku for president in 2019 if he decides to run instead of the incumbent, Buhari.

But in a statement by Atiku’s Media Office in Abuja, he was quoted to have said during a facility tour of the new Yaliam Press Limited in Jabi area of Abuja on Monday that it was wrong for people to think he is corrupt.
According to the statement, Atiku said that “he would fight corruption like never before if he is given the opportunity to preside over the affairs of the country.”

Part of the statement read, “It is sickening to continue to regurgitate allegations of corruption against me by people who have failed to come forward with a single shred of evidence of my misconduct while in office.
“People who are bereft of ideas about entrepreneurial spirit always think that everyone else is a thief just like them. Despite previous desperate efforts to link me with corruption, the William Jefferson trial in the United States ended in 2009 without indicting me or linking me to corrupt activities.”

He wondered how people who lacked initiative, personal resourcefulness and ideas about wealth creation will “always assume that a man cannot build himself without stealing.”

Atiku, who further told the management and members of staff of Yaliam Press how he retired from the Nigeria Customs Service with unblemished records, challenged anybody with evidence of him ever indulging in any sort of corrupt activities either in Customs or during his tenure as vice-president to file a petition against him.

“If Atiku is a thief merely because of his resourcefulness and successful investments, my political enemies should tell Nigerians the sources of their own stupendous wealth,” he said and suggested that if giving leadership opportunity in the country “I will shock everyone because I believe that I will fight corruption like never before.”

Soyinka disagrees with Obasanjo on restructuring