Biafra: Why Buhari should be arrested – Nnamdi Kanu 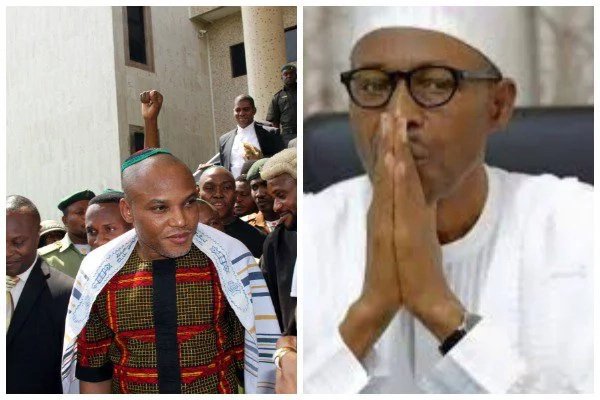 Leader of the Indigenous People of Biafra (IPOB), Nnamdi Kanu, has said President Muhammadu Buhari and the Director-General of the Department of State Services (DSS), Lawal Daura, should be arrested and detained for disobeying court orders.

Nnamdi Kanu advised those calling for his arrest to direct their anger towards Buhari.

“President Buhari was the one who broke the laws; he disobeyed the direct court order to release me unconditionally, not once, but twice”, he told The Sun.

“Honourable Shuaibu of Wuse magistrate court granted me bail, Buhari did not release me. Justice Ademola granted me unconditional bail, Buhari and his cousin, Lawal Daura, refused to honour that court order.

“They are the ones who should be detained for flagrant disobedience to court orders. I want the northern Arewa irredentists to call for the arrest of Buhari and Daura for flouting court order after court order asking for my release.

“It smacks of hypocrisy and absolute cowardice that people who could not rise up in defence of the law when a court made a judicial pronouncement are now clamouring for my arrest because they believe it is easy to do so.

“Before now, Nnamdi Kanu is Igbo, he is a Biafran and can be arrested and nothing will happen but that would not be anymore, it would no longer happen,” he said.

Nigerian government has approached a court in Abuja to seek the revocation of Kanu’s bail on the grounds that he had violated the conditions under which he was released.