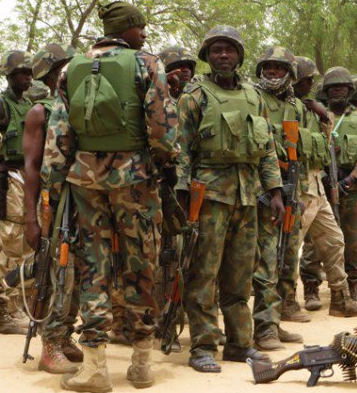 The joint military patrol team attached to the 19 battalion of the Nigeria Army in Sapele, Delta State yesterday arrested a kidnap kingpin identified as Robinson Okotie. Leader of the patrol team, Lt Col. Aji Mohammed, who confirmed his arrest, said the suspect was apprehended around Ugbeyiyi Junction by Memory Super Market in Sapele. During interrogation, the suspect reportedly confessed to being a member of the kidnapping ring that has been terrorizing residents of Sapele and its environs.

Mohammed added that the suspect also confessed to have been responsible for the killing of two soldiers in the area who were on routine patrol along Ovoh Creek recently.
Accordingly, the suspect led the team to their hideout where they arrested one David Adogbefi, another gang member.

Mohammed added that the patrol team was faced with a fierce gun battle when they went in search of other members of the gang hiding in the creeks. Two of the suspected kidnap gang members were killed by the military, while others escaped with bullet wounds.

[Must Read] ‘Too Late To Restructure Nigeria’ ...