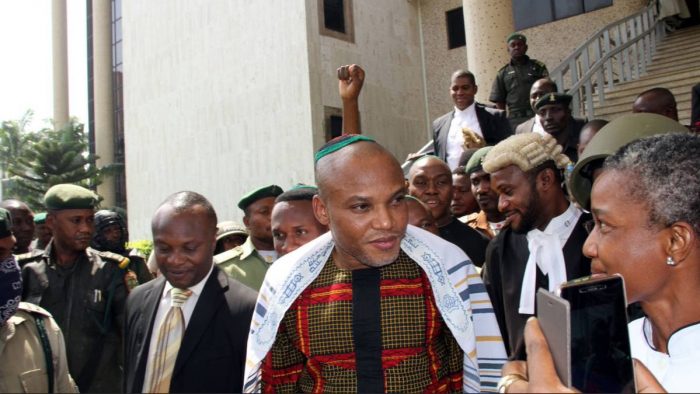 A man called Nnamdi Kanu and his movement called the Indigenous People of Biafra (IPOB) single-handedly brings the whole of the south-east of our country to a standstill with his one day “stay at home order” and someone in the Presidency says they don’t consider him to be a leader of thought? Clearly the Villa curse has set in.

Delusion is a terrible affliction and treating those that have won the hearts and minds of millions of Igbo youth in our country with contempt and disdain will prove to be a costly mistake for the Buhari administration.

This is all the more so because those that are expressing their desire and agitating for Biafra have broken no law. They have not killed or threatened to kill anyone, they are not waging war on the Nigerian state, they are not involved in any form of rebellion and they are not undertaking an armed struggle.

They are simply exercising their inalienable and undeniable constitutional right of free speech, freedom of association and self-determination and they are doing so in a peaceful and passive manner.

These rights are not only sacred but they are also guaranteed and protected by international law and custom. Consequently the threat, by Acting President Yemi Osinbajo, to send those that exercise those rights to jail is not only an exercise in futility but also provocative and unacceptable.

I strongly advise the Acting President to manage this matter very carefully and to stop trying to please or cow-tow to the cabal that have encircled him.

Osinbajo ought to know that even if he jails and kills every Biafran in the country others will rise up and carry on the fight. He cannot succesfully intimidate or threaten a growing movement and philosophy with words and threats. Matters have gone far beyond that now.

He cannot keep Nigeria together with violence or threats of violence. He can only keep her together by the constant expression of love and the regular repetition of regrets for past actions and injustices.

The operators of the Nigerian state cannot strip a man bare, take everything away from him, including his dignity, brutalise him morning, day and night and still expect him to keep quiet.

Whether anyone likes to admit it or not the truth is that Biafra is a reality. It is a spirit that has captured the hearts and minds of millions of young Igbo people: it burns in their souls and has ignited their passions.

It is an idea and concept that has also kindled the imagination and dreams of millions of southerners and Middle Belters who have come to appreciate the fact that there is a credible alternative to the nebulous and unjust status quo and the shattered dreams, cruelty and bondage that the Nigerian state continuosly throws up and offers.

Those in power today must live with this new reality and pray hard that these young men and women have a change of heart. Other than that they cannot stop Biafra and, when the time comes, neither will they be in a position to stop Oduduwa.

Finally this point has to be made. It is a mistake to equate the lawful and legitimate aspiration and agitation for Biafra with the unlawful and illegitimate quit notice and threat given to the Igbo people to leave the north by the Arewa youths.

The former is the peaceful exercise of ones God-given and constitutionally-guaranteed freewill to determine ones own fate, future and destiny whilst the latter is the unlawful and violent imposition of the will of one people against another through the use of violence and threats.

The former is a righteous, wholesome and noble quest whilst the latter is nothing but wickedness, tyranny and witchcraft.

Simply put the brazen threat and quit notice given to the Igbos in the north by the Arewa Youths is manifestly unlawful, immoral, dangerous and irresponsible whilst the expression for the establishment and creation of the sovereign State of Biafra is not only lawful but also legitimate and desirable for those who believe in it.

The two cannot be compared and neither can it be logically argued or inferred that one led to the other.

Permit me to conclude this contribution with an aside.

I have the greatest respect for Pastor Tunde Bakare and he knows how much I love him. However he is in grave error when he compares Buhari to King David as has been reported.

David was an anointed servant of the Living God and a member of the Kingdom of light.

Buhari is an anointed servant of the devil and, like Pharaoh and Herod, he is a member of the Kingdom of Darkness.

Bakare is also wrong when he says that Buhari is “on the path to recovery” and that he will return to lead the nation. This is false.

Buhari has been rejected by the Lord and he is suffering the judgement of God for his injustice and wickedness to others.

He is not on the road to recovery, I fear that he is in a vegetative state if not already dead and he will not be coming back to lead the nation. Sadly that is the position and the sooner we learn to accept that fact the better it is for us all.

As fawning and weak as Osinbajo is, as a Southerner and a believer, he needs our support and encouragement and not subtle condemnations and discouraging words from his fellow Pastors.

Femi Fani-Kayode is a lawyer, a Nigerian politician, an evangelical christian, an essayist, a poet and he was the Special Assistant (Public Affairs) to President Olusegun Obasanjo from July 2003 until June 2006. He was the minister of culture and tourism of the Federal Republic of Nigeria from June 22nd to Nov 7th 2006 and as the minister of Aviation from Nov 7th 2006 to May 29th 2007. He tweets from@realFFK.