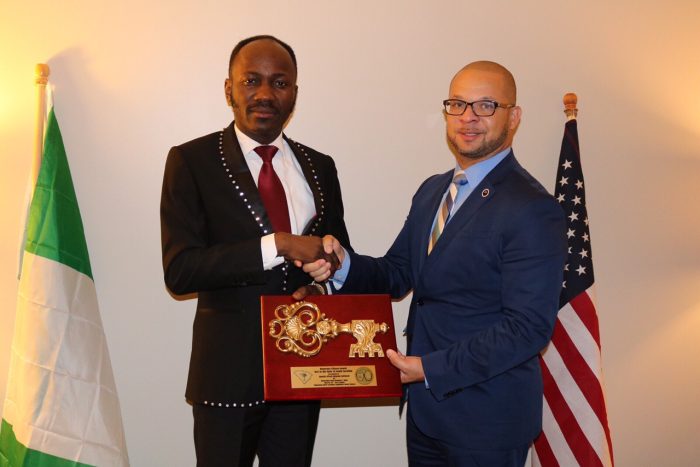 Radical evangelist and general overseer of Auchi-based Omega Fire Ministries International, Apostle Johnson Suleman was on Thursday, June 21, 2017 conferred with the award and key of the State of South Carolina which is a Honorary Citizenship by the state of South Carolina, United States of America.

The event took place at the Faithful Centre Bible Church, Inglewood, California where Apostle Suleman held the region’s edition of his ministry’s life-changing crusade with the theme: :Help From Above”, on Tuesday and Wednesday.

Leader of delegation and Rep., John Richard C. King said the honour, which is the highest given to non-residents of South Carolina was sequel to approval of the House of Representatives of the State in recognition of Apostle Suleman’s contribution to humanity.

“Apostle Suleman is so privileged, because there are a lot of people out there who are equally blessed if not more but are not willing to do,” noted a member of the award committee.

Apostle Suleman at the ceremony dedicated the award to God, his better half and partner,Dr Lizzy Johnson Suleman as well as members of the Omega Fire Ministries,worldwide.

A letter exclusively by dated June 8, 2017 conveying the approval of the House and signed by Richard C. King, Chairman South Carolina Legislators Black Caucus also indicated that the state was looking forward to hosting Apostle Suleman at its Capitol Hill

The letter reads: “We would like to confer upon you the Honorary Citizenship of South Carolina for being an accomplished humanitarian. This is the highest honour given to non residents of the State of South Carolina.

“We look forward to hosting you at the South Carolina State Capitol and exploring future partnerships with you and the State of South Carolina.”

Apostle Suleman is also expected to have a meeting with senators representing the State later tonight. The meeting will have in attendance the State’s lawmakers to be led by Rep. John C. King who is representing South Carolina. Others in the list include Rep. Harold Love, representing Tennessee, and Hon. Dr. Dee Dawkins-Haigler, representing Atlanta-Georgia.

Suleman’s Communications Manager, Phrank Shaibu in a reaction thanked the government and people of the State of South Carolina for finding Apostle Suleman worthy of such a high honour, noting that it’s also an indication of the acceptance of the message of salvation which Omega Fire Ministries has taken to the United States and other parts of the world.

“We are grateful and elated that the message of salvation, love and compassion which the servant of God has taken to the United States of America and other parts of the world has been widely accepted and bearing fruits. This honour by the State of South Carolina bears testimony to this reality”, he stated.

Shaibu assured members of the church worldwide as well as other well meaning citizens of Apostle Suleman’s commitment to the values, prayers and lifestyle for which he has become well known and called on them not to relent in praying for the cleric.

[MUST READ] To Those Who Threaten To ...