We are clamouring for true federalism – says Gov Wike 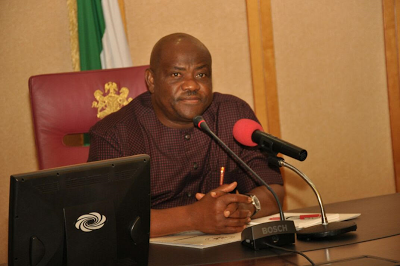 Gov. Nyesom Wike of Rivers in Port Harcourt on Tuesday called for true federalism in Nigeria to enable each part of the country to develop according to its ability.

The governor  made the call when he hosted the U.S. Ambassador to Nigeria, Mr William Symington, the governor’s  Special Assistant on Electronic Media, Mr Simeon Nwakaudu, said in a statement.

He explained that Rivers people wanted true federalism because they wanted a country where all the federating units were allowed to develop according to their resources.

Wike said that the demand for true federalism meant that Rivers people believed in one united Nigeria, where no section was denied the control of its own resources.

He urged the U.S. Government to set up a visa office in Port Harcourt to cater to the South-South and the Southeast geo-political zones.

“We talk about true federalism as practised in America, a true presidential system where all the federating units will be allowed to enjoy their resources and contribute to the centre, ” Wike said.

He said the people believed that there must be a country called Nigeria in which  everyone  would work together to achieve unity and progress.

The governor said Rivers people sought to be treated with equity, fairness and justice.

He said that the right framework should be established to ensure that all the states excelled at their own pace.

He said Rivers  was safe for investments and promised that  his administration would partner investors to enable them to benefit from their investments.

“Forget about the media propaganda, this state is an opposition state, therefore don’t expect them to say it is the best.

‘’But we are the best state, we are doing everything to ensure that investors  do profitable business under the ambit of the law,” the governor said.

The ambassador commended Nigerians for their unity  and added: “Nigeria will be great and I expect a super power and a super partner. ”