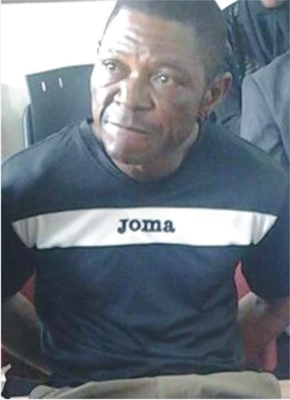 42-year old Aminu Umar pictured above has been arrested and charged before a Lagos court for allegedly defiling his neighbors two under-aged girls, 4, 7 at the same time on several occasions after luring them with Bobo drinks to his apartment.

P.M.EXPRESS reports that the incident happened at 5 Salako street in Oko- Oba area in the suburb of Lagos where both the suspect and victims parents reside.

According to Police sources, the Kano state-born who is a butcher usually return early to their house after he finished killing cows at abattoir. While he was at home, he would lure the victims into his apartments with Bobo drinks when their parents were not around and defiled them.

This has been going on without the victims informing their parents until the recent assault on the victims, a police source revealed.

Umar’s abominable act was exposed when the mother of the 7-year old victim took her to the bathroom to bath her. It was gathered that when the mother attempted to wash her private, she started crying and complained she was feeling pains following the alleged defilement.

According to the 7-year old victim, “Umah lured us into his room and gave us Bobo thereafter,  he removed his clothes and our pants and clothes too and carried us to his bed where he will be putting his penis into our vagina.’

Thier angry mother after checking her daughter’s private saw bruises which indicated that something had gone wrong reported the matter to the Police and Umah was arrested and charged to court.

Appearing before Magistrate, Mrs. Davis Abegunde he pleaded not guilty and informed the court that his wife was not living with him.

He was granted bail in the sum of N1m with two sureties in like sum. Umah was remanded in prison custody pending when he will perfect his bail condition.