Femi Fani-Kayode: The Ringing of Coup Bells and a Cause for Deep Concern 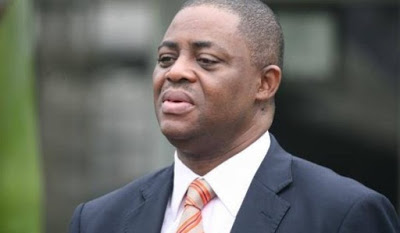 The following article was published on Femi Fani-Kayode‘s Facebook Page on Thursday, May 18, 2017.

I am very worried now. Ever since 1966 the northern ruling class has ALWAYS effected a coup d’etat whenever they feel sufficiently threatened with the loss of power.

The only time that they failed to do this, to their eternal regret, was when President Goodluck Jonathan succeeded President Umaru Yar”Adua after the latter’s death in 2010.

Up until today they blame my friend and brother Lt. Abdulrahman General Dambazau for that failure and they felt he was weak and cowardly.

This is because he was the Chief of Army Staff at the time and he did not strike.

He paid a heavy price for his “weakness” and for not doing their bidding a few years later because when Buhari came to power in 2015 instead of appointing him Minister of Defence or National Security Advisor, which is what he had originally been penned down for, he appointed him as Minister of Interior which is far less strategic and important.

As a consequence of his “failure” to strike they had to endure Jonathan for 5 long years and their response was to covertly support and encourage Boko Haram to make parts of the country “ungovernable” and to organise the whole Chibok girls affair, in collusion with a notable foreign intelligence agency and foreign Government, to get him out by 2015.

President Muhammadu Buhari was “elected” into office that year and now his fate is similar to Yar’Adua’s. He is chronically ill and he is NOT coming back to lead and rule as he once did because he will NEVER be the same again.

Once he dies the northern ruling class have already decided on what to do.

They will give Vice President Yemi Osinbajo an ultimatum and they will threaten him and ask him to resign.

They have resolved that they will not allow power to go to the south and they will encourage their senior officers in the military to effect a coup.

In doing so they are only doing what they have ALWAYS done when they feel sufficiently threatened with the loss of power. That is their way. And that is the measure of their ruthlessness and determination to hold on to power.

They would rather have a core northern military dictator in power than a southern leader or President.

And they are prepared to kill anyone, no matter how highly placed, who stands in their way or who attempts to oppose or stop them.

The only options that exist if they are to be stopped is, firstly, if someone beats them to it by effecting a “progressive” Rawlings, Orkar or Nzeogwu-type coup of junior southern and Middle Belt officers.

This would lead to massive loss of life and to civil war and it is therefore unacceptable.

The other option is for the southern and Middle Belt civilian population to come together and march the streets in an attempt to resist military insurrection and mutiny in the name of fighting for and attempting to preserve democracy.

That would be the best option but sadly we do not have a very good track record when it comes to protesting against injustice and the truncuation of democracy and this is especially so because the core north will openly support the coup and hail it.

However one thing is clear this time around: if a coup led and inspired by the core north and the FN takes place simply to keep a southerner out of power it will signal the end of Nigeria as a united country.

Such is the anger and frustration in the south and Middle Belt today about the excesses, abuses of power, wickedness, bondage and arrogance of the north that there is likely to be a very violent reaction to any northern coup.

This may well lead to the disintigration of the Federation and when it gets to that point even the army will be hard pressed to keep us together as one nation.

The likelihood is that it would lead to a second civil war because even the army would be split down the middle along regional, ethnic and religious lines.

That is the catastrophy, madness, chaos and carnage that the northern ruling class are now leading us to and toying with in their insane quest to hold on to power.

That is where they are pushing us to with their obsessive and insatiable appetite and lust for that power.

It is for this reason that the plan by the cabal in Buhari’s government and the northern ruling elite to effect a coup in order to keep power for themselves and their people and to stop a southerner from enjoying it must be condemned and resisted by ALL men and women of goodwill.

And as we condemn it we must prepare for a very strong reaction to it (and not just with loud and empty words) when they strike.

We must not let them steal our country from us right under our noses and deny us the right to wield power as the constitution dictates.

We must not let them abort democracy even though Buhari’s rule can hardly be described as one and would be better described as a murderous and despotic civilian dictatorship.

TagsFemi Fani KayodeFFKNIGERIAThe Ringing of Coup Bells and a Cause for Deep Concern
Share:
Previous Article