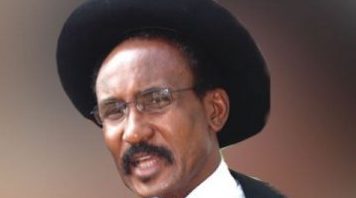 He further lamented that after three courts, plus the ECOWAS court had granted the former security chief bail, the federal government continues to detain him.

Umar, who stated this in a statement issued on Sunday, therefore said it was no longer safe for Nigerians to remain neutral in the face of “this monumental injustice. When one Nigerian is unlawfully detained all of us must have the moral consciousness to feel psychologically incarcerated.”

He said, “Most fair-minded Nigerians are no more impressed and are indeed sceptical with the conduct of this government’s anti-corruption war which appears to be aimed at the neutralisation and destruction of the opposition.

“It is over one year since three law courts, including ECOWAS Court granted bail to Col. M.S. Dasuki. The Federal Government has however refused to release him citing the untenable excuse of the grievous nature of his offence. Our extant constitution is quite clear on this issue.

“The Federal Government does not have the power to determine which offence is bail-able or whether an accused person is deserving of bail. It should, therefore, obey courts’ decisions and release Col. Dasuki without any further delay. His unlawful detention, campaign of calumny and pre-trial publicity make it impossible for him to receive a fair trial.

“The only explanation one can find for Col. Dasuki’s lengthy detention without trial is that he belongs to the wrong camp. He has also the misfortune of having served as National Security Adviser to the much vilified Nigerian president of Ijaw extraction.”

According to Umar, Colonel Dasuki’s fate is tied to that of his former principal, Jonathan, “an honourable and patriotic Nigerian who conceded defeat and congratulated the winner of the 2015 Presidential election Gen Muhammadu Buhari even before INEC declared the final results, when he could have held on tenaciously to power as is the norm in many Third World countries.”

Umar frowned that the rare act of statesmanship displayed by Jonathan, which pulled the country back from the “precipice,” has been rewarded by President Muhammadu Buhari’s government with “utmost disrespect and derision.”

He added, “President Jonathan is the most maligned Nigerian former Head of State. Col. Dasuki is paying dearly for his loyal service to this patriot. All well-meaning Nigerians must speak out against his unfair and unlawful treatment.

“We cannot afford to remain neutral in the face of this monumental injustice. When one Nigerian is unlawfully detained all of us must have the moral consciousness to feel psychologically incarcerated.”

Umar however applauded the decision of the Federal Government of Nigeria to suspend the SGF Mr David Babachir Lawal and the director general, Nigeria Intelligence Agency (NIA) Mr Ayodele Oke while they are being investigated as a welcome development in APC’s war against corruption.

“It is also remarkable and commendable that the government has decided not to detain the duo while they are being investigated. This is a welcome departure from the prevailing anti-democratic process by which accused persons, particularly from the opposition camp, are unlawfully detained pending the commencement of investigations, or refused bail granted by law courts.

“There is national unanimity in support of the war against corruption which is expected to be non-discriminatory and waged by a meticulous adherence to the rule of law. For the war to be meaningful and sustainable, it must be elevated beyond a President Buhari personal struggle to a national one,” he said.