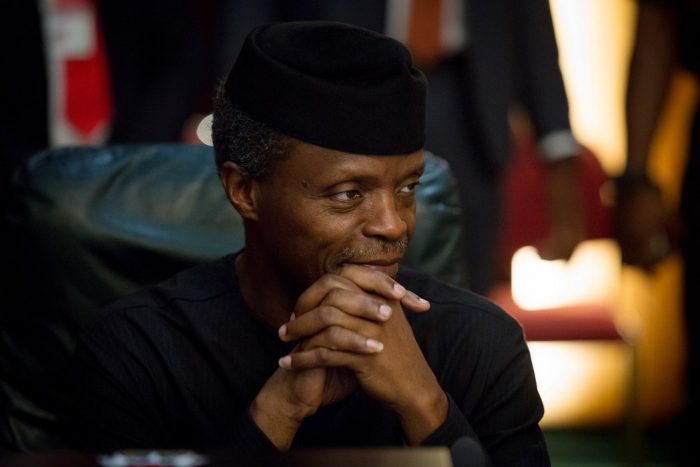 The committee set up to investigate the suspended Director General of the National Intelligence Agency, Ambassador Ayo Oke, and the suspended Secretary to the Government of the Federation, Babachir Lawal, has shelved plans to invite former President Goodluck Jonathan, Punch reports.

The committee, which is led by Vice-President Yemi Osinbajo, also has the Attorney General of the Federation, Abubakar Malami (SAN), and the National Security Adviser, Babagana Moguno, as members.

Part of the tasks of the committee is to investigate why the NIA kept $43.4m, N23m and £27,000 (N13bn) in a house in Ikoyi. The money was seized by the Economic and Financial Crimes Commission, based on a tip-off from a whistle-blower.

Punch had reported on Friday that the suspended NIA DG had informed Osinbajo and the NSA that the money, which was originally, $289,202,382, emanated from the National Petroleum Investment Management Service on February 25, 2015, based on the instruction of then President Goodluck Jonathan.

Following the revelation, there were reports that the panel would invite Jonathan to understand the rationale behind the transaction, following allegations by the EFCC that the money was meant for the prosecution of the 2015 presidential election.

Jonathan’s media aides have since refused to comment on the matter.

However, an impeccable source within the Federal Government told one of our correspondents that Jonathan would not be invited.

The source, who wished to remain anonymous because of the sensitivity of the case, told our correspondent that this was not the first time that Jonathan’s name had featured in a probe.

He explained that he was deliberately being left out for political reasons.

The source said, “We have carried out several probes, including the $2.1bn arms scam involving the (former) service chiefs and the former NSA, Col. Sambo Dasuki; we have probed the $1.3bn Malabu scam involving the former AGF, Mohammed Adoke (SAN), as well as dozens of other investigations.

“In all of these, the persons involved have all claimed to have received approval from Jonathan. But inviting or prosecuting a former President has a lot of implications.”

Also, another source familiar with the work of the committee told Sunday PUNCH on Saturday on condition of anonymity that it was unlikely that Jonathan would be invited over the matter.

The source said, “I can tell you that it is most unlikely that the committee will question the former President.

“Firstly, a former President cannot be treated that way. We are not talking about criminal prosecution here. But in this kind of case, he will be treated with the respect he deserves.

“Secondly, that he approved the money in itself is not a crime. The concern of the committee will be about what the money was used for after approval.

“It is possible for security agencies to seek approval for money and state the purpose. It is another thing for them to spend the money on the purpose for which it was approved.”

The source however added that if Jonathan of his own volition offers to assist investigation by providing helpful information through back channels, such information would be appreciated.

There were reports last week that Jonathan; the Governor of the Central Bank of Nigeria, Godwin Emefiele; and the EFCC Chairman, Ibrahim Magu, would be questioned by the presidential panel to answer questions on the recovered N13bn.

According to the reports, the panel would contact the former President and arrange a convenient way to meet him, rather than invite him.

Meanwhile, the Presidency on Saturday said the presidential committee set up by Buhari to investigate Lawal and the suspended Director-General of the NIA would invite relevant government officials and private individuals connected to both cases.

The Senior Special Assistant to the Vice President on Media and Publicity, Mr. Laolu Akande, disclosed this in a statement made available to journalists.

Akande said the committee would also obtain and scrutinise documents that may shed more light on the issues raised in both cases.

He said the committee, which had started work in earnest, would be holding its proceedings behind closed doors to allow full disclosure.

The statement read, “The Presidential Committee set up earlier this week by President Muhammadu Buhari to probe certain allegations against the Secretary to the Government of the Federation, Mr. Babachir Lawal, and the Director General of the National Intelligence Agency, NIA, Mr. Ayo Oke, has commenced its work in earnest.

“In the discharge of its work, the panel is expected to invite all relevant officials and private individuals who may be connected to both cases. It will also obtain and scrutinise documents that may throw some light on the issues raised in both cases.

“All its proceedings will however be in closed sessions to avoid speculations, allow for full disclosure and enhance pace of work.

“The panel, which is expected to submit its report to the President at the expiration of the 14-day deadline, will conduct its work with utmost diligence and without fear or favour.”