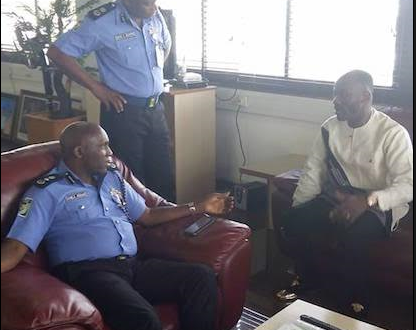 Founder of the Omega Fire Ministry, Apostle Johnson Suleman visited the Police Force Headquarters in Abuja on Saturday, where he had a meeting with the Deputy Inspector General of Police, Joshak Habila and Commissioner of Police, Okoye Celestine.

His visit to the Force Headquarters is coming days after his alleged adultery accuser, Miss Stephanie Otobo, slammed the Auchi-based cleric with a $5 million lawsuit lodged at an Ontario court in Canada with case file number CV-17-573595, signed by Registrar of the Ontario Superior Court and addressed to Apostle Suleman’s Ontario residence.

Though, details of the meeting were not revealed, close watchers are of the opinion that Apostle Suleman may just be plotting another move to bring Miss Otobo who has now returned to Canada, to her knees for supposedly wrongfully accusing him of adultery.