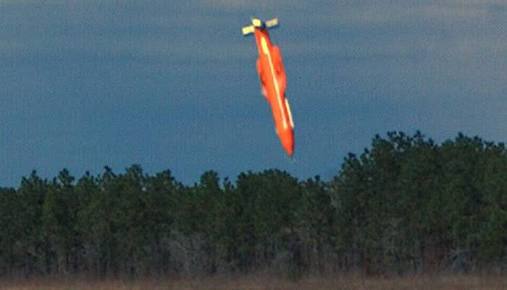 The super bomb President Donald Trump dropped Thursday on tunnels in Eastern Afghanistan killed 36  ISIS militants, according to the Afghan Ministry of Defence. The blast, from the weapon dubbed the “mother of all bombs,” destroyed three underground tunnels as well as weapons and ammunition, but no civilians were hurt, said a Defense Ministry spokesman.

Trump said Thursday the bombing was “another successful job.” It is the third major military action his administration has taken in recent months, following a military raid in Yemen that left civilians and a US Marine dead, and last week’s surprise strike on a Syrian airfield.

CNN had reported that the GBU-43/B Massive Ordinance Air Blast bomb (MOAB) was dropped on ISIS positions in Nangarhar province, near the Pakistan border. It was the first time this type of bomb had been used in combat and was dropped from a MC-130 aircraft, Pentagon spokesman Adam Stump said. The 21,000-pound bomb, first tested in 2003, is known as the Massive Ordinance Air Blast bomb, or MOAB. In military circles, the acronym is known better as the “Mother of All Bombs.” CNN said the MOAB bomb was selected because the area targeted was in an extremely remote portion of the country, meaning risk to civilians was minimal. The sheer power of the blast would also be more effective in destroying underground tunnels carved out of the rocky terrain that other conventional bombs might not penetrate. The MOAB is so heavy it is carried over the target by a C-130 cargo plane, then essentially shoved out the back when it’s ready to be deployed.

The Nangarhar  province, which was targeted borders Pakistan’s tribal area, a porous border that extremists have exploited in eluding coalition forces. A U.S. Marine was killed in that province last week amid ongoing counter-terrorism activities. So far, the extent of damage is still being collated. General John Nicholson, the head of U.S. and international forces in Afghanistan, said:

A local resident living around two kilometers (1.5 miles) from the blast told CNN he heard an “extremely loud boom that smashed the windows of our house.”
“We were all scared and my children and my wife were crying. We thought it had happened right in front of our house,” he said.