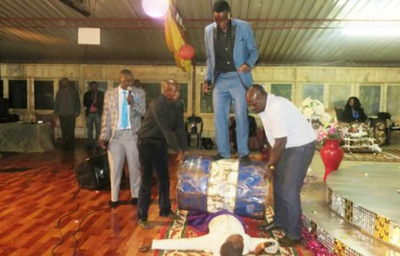 Just when you think you have heard and seen it all, well here is Prophet Wiriranayi Gomani of Jubilee City International Church in Zimbabwe, who is reportedly doing wonders by using a drum to roll over congregants or walk on them to cast out demons.
According to to the acclaimed man of God, after healing them they will be in comatose in other to get spiritual strength from angels.

‘When we heal people they will be in comatose a spirit where angels will be surrounding them and giving them strength spiritually,’ claims the prophet.

“I do not use juju or any spirit but it is the power of God l support that with a verse in the bible Genesis chapter 2 verse 21 to 24 when Adam was put into a deep sleep by God to remove a rib so as to create Eve without any pain.

‘In a similar incident in Exodus chapter 24 Moses took 40 days and 40 nights without food and he never got hungry but was finally advised to build Ark that is comatose,’ he added saying.

According to Kwayedza local media, many congregants of his church are testifying that the prophet is doing wonders in their life.