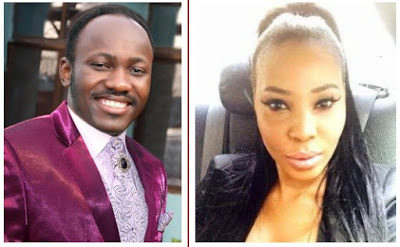 This is an article written by Richard Akinola, Executive Director of Media Rights Agenda (MRA), renowned journalist and legal practitioner, on his take on the ongoing issue between Apostle Suleman and Stephanie Otobo. Please read on…

“I have followed issues raised in the press conference of Stephanie Otobo, the alleged mistress of Apostle Suleiman and a number of reactions to it but my position on the issue has not changed”.

When a stalker is desperate, he/she can go to any length to get his/her victim’s attention. If you know the itinerary of your target, particularly a preacher whose international meetings are made public, a desperate stalker can go there in attempt to see the person.

Some years ago, pastor Adeboye told a story of a lady stalker, who consistently came to him to tell him that she was his ordained wife. Adeboye said he always rebuffed the lady, telling her that how can that be true when he was married. He said the lady continued to stalk him. Then, one day, he said he travelled abroad unannounced for an engagement. A day after he arrived, Adeboye said someone knocked his hotel room door and as he opened it, behold it was this same lady. Aghast, Adeboye said he didn’t know how she knew he was travelling, the place he was going and his hotel. He then realised that she was not an ordinary person but an agent of the devil and out of righteous anger, he warned the lady that the next time he set his eyes on her, she would die. And that was the end of the lady’s stalking.

I am not in any way trying to defend Suleiman but my instinct tells me there is more to this that meets the eye. I am not carried away by all the salacious details of Otobo. I would rather wait for her trial in court where all the facts would be laid bare, after rigorous cross examination and evidences. I know that Suleiman has only made tentative statements on this issue, perhaps not wanting his proposed evidence in court to be ambushed. That is my reading.

And l know that Suleiman had been tried and convicted in the media but l am giving him a benefit of doubt. You don’t have to agree with me but things are
not always the way they seem because there are three sides to the case- his side, her side and the truth. Waiting for the case to commence in court.