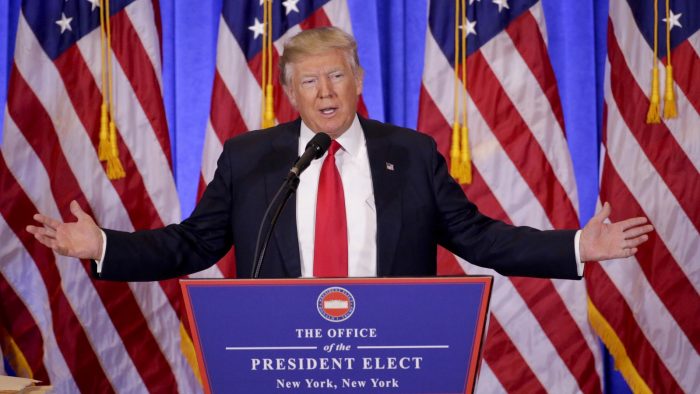 Donald Trump dismissed rumors of salacious activities in Russia, noting to reporters Wednesday, January 11, 2017  that he is “very much a germaphobe.”

The president-elect’s dismissal of the allegations came a day after unsubstantiated reports that Russian intelligence had information about him as a result of a secret video showing him in compromising — and disgusting — circumstances.

The video, according to news reports Tuesday night, allegedly showed Trump with prostitutes in 2013 in a hotel room where the women urinated on the bed. Trump angrily denied those claims on Wednesday.

“Does anyone really believe that story?,” Trump asked at a news conference at Trump Tower in New York City.

Trump is in fact well-known for having a fear of germs. He has been, in the past, reluctant to shake hands for that reason.

Trump said he was savvy enough to be on his best behavior while staying overseas.

“In those rooms, you have cameras in the strangest places, cameras that are so small with modern technology, you can’t see them and you won’t know,” Trump mused.

“You’d better be careful or you’ll be watching yourself on nightly television. I tell this to people all the time. I was in Russia years ago with the Miss Universe contest, which did very well, Moscow, the Moscow area, did very, very well.”

“And I told many people, be careful, because you don’t want to see yourself on television. Cameras all over the place.”

Nigeria: Why We Must #OccupyCBN | STATEMENT