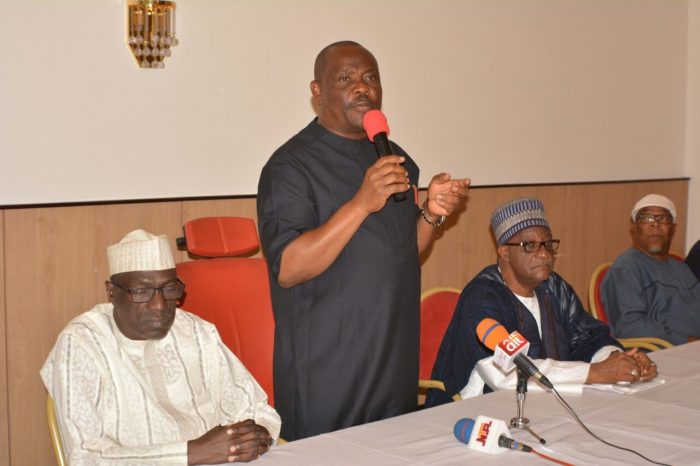 The Peoples Democratic Party, PDP, in Rivers State says it vehemently rejects the results as announced by the presiding officers of the Independent National Electoral Commission, INEC, declaring the candidates of the All Progressives Congress, APC, Magnus Abe, Barry Mpigi, Friday Nke-Ee, Innocent Barikor and others as winners of their legislative seats in Rivers South East Senatorial District.

A statement signed by Jerry Needam, a spokesperson to the PDP chairman in Rivers State, Felix Obuah, on Monday, December 12, 2016 says the party’s rejects the result of the poll because elections never took place in the entire Rivers South East District.

The PDP challenged the APC, INEC, Army, Police or other security agencies to show proof that there was election in the zone, adding that whoever lays claim to results in the area or claims that election took place is a criminal.

Mr. Obuah explained that what happened on Saturday was nothing short of war declared on the people of the Rivers South East by Magnus Abe, Barry Mpigi, Army, SARS, Policemen and APC thugs dressed in Army uniform.

He liked the conduct of the APC and their collaborators as “scenes from a classical movie where military might was brazenly deployed to over-run a hapless and defenseless people”.

The PDP said the situation became most unfortunate when it recalled the series of outcry from the party on the unwholesome activities of some chieftains of the APC in Ogoniland, including Derrick Mene, executive director of finance and administration of Niger Delta Development Commission, NDDC, who connived with the INEC, Military, SARS and APC thugs to hijack the electoral process.

Obuah expressed regret saying the numerous alarms raised by the PDP fell on deaf ears as the same INEC, police and military who were expected to arrest the situation turned blind eye.

The PDP alleged that there was an invasion of some communities in Tai Local Government Area by the combined forces of the army, police and scores of identifiable thugs imported by the All Progressives Congress, APC.

He lamented the arrest of over 200 innocent citizens while scores were shot at and one killed by the army sponsored by Mr. Barry Mpigi, candidate of the APC for Tai/Eleme/Oyigbo Federal Constituency.

The statement also recalled that in Barako, Gokana LGA, army invaded the community on the orders of the Senatorial candidate of the APC for Rivers South East, Mr. Magnus Abe and whisked away scores of persons including one Chief Awindi Dughor, a chieftain of the PDP to an unknown destination.

Another disturbing case, according to the PDP, was that of Mr. Derrick Mene, the finance and administration director of the NDDC, who with the connivance of security agencies stationed along the road at school to Land axis of Wiiyaakara in Khana Local Government Area, hijacked materials meant for Wards 8, 9, 18 and other wards.

Obuah said Mr. Mene took the hijacked materials to his hotel at Wiiyaakara where they thump-printed and wrote results, and that he called on the Inspector-General of Police and the army authorities to move in immediately and recover those materials.

The PDP also recalled that the private residence of Magnus Abe was used as the INEC collation center for collating of Gokana results.

The PDP chairman stated that the party having reviewed the entire exercise last Saturday came to the conclusion that there was no election in Khana LGA, calling on INEC to cancel the Re-run elections in the LGA as it has been marred by irregularities and orchestrated violence by the All Progressives Congress (APC) against members of the PDP.

The PDP drew the attention of INEC, APC and its collaborators namely Army, SARS and Police which mortgaged its conscience to declare Magnus Abe, Barry Mpigi and the other APC candidates in Rivers South East winner to the consequences of going to equity with unclean hands.

“If Magnus Abe knows God, he cannot lay claim to stolen results. Thieves are not Christians, unless he is telling us that he is a thief. It’s very ungodly to steal. Magnus Abe and his cohorts have robed the people”, Obuah declared.

Nasir El Rufai and the bloodfest in ...